Team of Five: The Presidents Club in the Age of Trump (Hardcover) 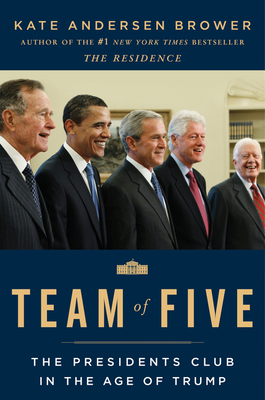 By Kate Andersen Brower
$28.99
NOT CURRENTLY IN THE STORE - Available to Order - Usually Arrives in Store in 1-5 Business Days!

From the #1 New York Times bestselling author of The Residence and First Women—also a New York Times bestseller—comes a poignant, news-making look at the lives of the five former presidents in the wake of their White House years, including the surprising friendships they have formed through shared perspective and empathy.

After serving the highest office of American government, five men—Jimmy Carter, the late George H. W. Bush, Bill Clinton, George W. Bush, and Barack Obama—became members of the world’s most exclusive fraternity. In Team of Five, Kate Andersen Brower goes beyond the White House to uncover what, exactly, comes after the presidency, offering a glimpse into the complex relationships of these five former presidents, and how each of these men views his place in a nation that has been upended by the Oval Office’s current, norm-breaking occupant, President Donald Trump.

With an empathetic yet critical eye and firsthand testimony from the Carters, Donald Trump, and the top aides, friends, and family members of the five former presidents, Team of Five takes us inside the exclusive world of these powerful men and their families, including the unlikely friendship between George W. Bush and Michelle Obama, the last private visits Bill Clinton and Barack Obama shared with George H.W. Bush, and the Obamas’ flight to Palm Springs after Donald Trump’s inauguration. Perhaps most timely, this insightful, illuminating book overflows with anecdotes about how the ex-presidents are working to combat President Trump’s attempts to undo the achievements and hard work accomplished during their own terms.

Perhaps most poignantly, Team of Five sheds light on the inherent loneliness and inevitable feelings of powerlessness and frustration that come with no longer being the most important person in the world, but a leader with only symbolic power. There are ways, though, that these men, and their wives, have become powerful political and cultural forces in American life, even as so-called “formers.”

“Brower is quickly becoming a brand-name Washington writer because of her ability to deliver juicy tidbits and insider information while steering her books toward a mainstream audience without sacrificing historical credibility.”
— Christian Science Monitor

“Illuminating and anecdote-laden . . . . Presidential history buffs will enjoy this respectful peek into one of America’s most exclusive clubs.”
— Publishers Weekly

“Brower does not deny partisan politics, but she finds an overarching spirit of camaraderie among those who’ve borne the office’s burdens. Based on what Brower has learned from the past, she guardedly and generously tries to anticipate how Donald Trump will fare when he eventually joins this tiny fraternity. Insights into presidential life beyond the rancor of everyday politics will make this a very popular read for the general public.”
— Booklist (starred review)

“Downton Abbey for the White House Staff.”
— Today on The Residence

“An intimate, compulsively readable account of the dynamics that have shaped—and sometimes destroyed—relations at the top of the American political hierarchy.... [and] a valuable addition to the literature of the modern presidency.”
— Wall Street Journal on First in Line

“Crisp, engrossing.... Brower delivers what she did in her previous books, a readable, insightful account of how the vice presidency has evolved and the men could end up in the Oval Office some day.”
— USA Today on First in Line

“Combining fascinating inside stories with astute political insights, First in Line fills a long-missing hole in American history. We learn here how men from Richard Nixon to Mike Pence have played their sometimes essential, sometimes useless roles in the prestigious but peculiar job of Vice President.”
— Cokie Roberts, author of Ladies of Liberty, on First in Line

“Kate Andersen Brower has a wonderful reporter’s eye for the telling detail that makes history engaging and real.”
— Evan Thomas, author of Ike’s Bluff and Being Nixon, on First in Line

“A highly readable . . . deep look at the women who help and sometimes overshadow their powerful husbands.”
— USA Today on First Women

“A revealing look at America’s first ladies, shining a spotlight on both their friendships and feuds.”
— The Today Show on First Women

“The tell-all The Residence, featuring intimate anecdotes collected from past and current White House staff members, is absolutely delicious.”
— Washington Post on The Residence

“Americans rarely get a glimpse of what life is really like in the fishbowl that is the White House. Kate Andersen Brower’s intimate portrait of what it’s like to take care of the first family is a compelling read. Whether you’re a political or history junkie or devoted Downton Abbey viewer, this book adds unique context to understanding our presidents as human beings, something that’s too often forgotten in our daily media grind.”
— Chuck Todd, Meet the Press, on The Residence