Last Stand: George Bird Grinnell, the Battle to Save the Buffalo, and the Birth of the New West (Paperback) 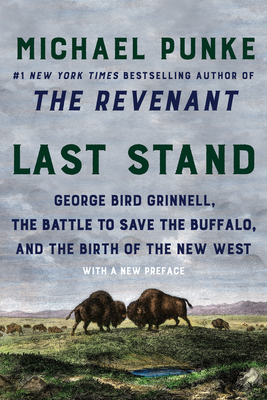 By Michael Punke
$17.99
NOT CURRENTLY IN THE STORE - Available to Order - Usually Arrives in Store in 1-5 Business Days!

The dramatic history of the extermination and resurrection of the American buffalo, by #1 bestselling author of The Revenant

Over the last three decades of the nineteenth century, an American buffalo herd once numbering 30 million animals was reduced to twelve. It was the era of Manifest Destiny, a Gilded Age that treated the West as nothing more than a treasure chest of resources to be dug up or shot down. The buffalo in this world was a commodity, hounded by legions of swashbucklers and unemployed veterans seeking to make their fortunes. Supporting these hide hunters, even buying their ammunition, was the U.S. Army, which considered the eradication of the buffalo essential to victory in its ongoing war on Native Americans.

Into that maelstrom rode young George Bird Grinnell. A scientist and a journalist, a hunter and a conservationist, Grinnell would lead the battle to save the buffalo from extinction. Fighting in the pages of magazines, in Washington's halls of power, and in the frozen valleys of Yellowstone, Grinnell and his allies sought to preserve an icon from the grinding appetite of Robber Baron America.

Grinnell shared his adventures with some of the greatest and most infamous characters of the American West—from John James Audubon and Buffalo Bill to George Armstrong Custer and Theodore Roosevelt (Grinnell's friend and ally). A strikingly contemporary story, the saga of Grinnell and the buffalo was the first national battle over the environment.

Last Stand is the story of the death of the old West and the birth of the new as well as an examination of how the West was really won—through the birth of the conservation movement. It is also the definitive history of the American buffalo, written by a master storyteller of the West.

Michael Punke lives with his family in Montana. A former partner in a Washington law firm, his diverse professional experience includes work on the White House National Security Council and on Capitol Hill. Punke is the history correspondent for Montana Quarterly magazine and is the author of a novel, The Revenant, about the adventures of a nineteenth-century frontiersman. Punke is also the author of a work of nonfiction, Fire and Brimstone: The North Butte Mining Disaster of 1917, a finalist for the Mountains and Plains Booksellers Award.

“Michael Punke’s meticulously researched Last Stand chronicles the transformation of the Great Plains from untouched wilderness in the mid-19th century to a land, less than 30 years later, where the future of wildlife hung in the balance.”
— Audubon (Editors’ Choice)

“We historians have for so long needed a biography of conservation giant George Bird Grinnell. Michael Punke has provided it, including little known exploits that were so important to Yellowstone National Park. I rejoice in the pleasure of Punke having filled so very large a void.”
— Lee Whittlesey, Yellowstone Park Historian, National Park Service

“Last Stand is all that western history should be. ... Fascinating.”.”
— Alan K. Simpson, Former U.S. Senator from Wyoming