How to Kidnap the Rich: A Novel (Paperback) 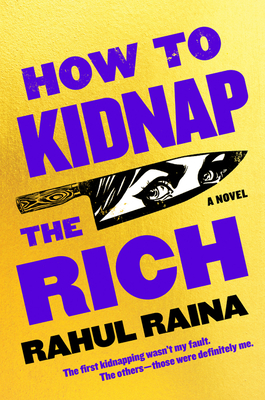 The first kidnapping wasn’t my fault. The others—those were definitely me.

Brilliant yet poor, Ramesh Kumar grew up working at his father’s tea stall in the Old City of Delhi. Now, he makes a lucrative living taking tests for the sons of India's elite—a situation that becomes complicated when one of his clients, the sweet but hapless eighteen-year-old Rudi Saxena, places first in the All Indias, the national university entrance exams, thanks to him.

Ramesh sees an opportunity—perhaps even an obligation—to cash in on Rudi’s newfound celebrity, not knowing that Rudi’s role on a game show will lead to unexpected love, followed by wild trouble when both young men are kidnapped.

But Ramesh outwits the criminals who’ve abducted them, turning the tables and becoming a kidnapper himself. As he leads Rudi through a maze of crimes both large and small, their dizzying journey reveals an India in all its complexity, beauty, and squalor, moving from the bottom rungs to the circles inhabited by the ultra-rich and everywhere in between.

A caper, social satire, and love story rolled into one, How to Kidnap the Rich is a wild ride told by a mesmerizing new talent with an electric voice.

Rahul Raina divides his time between Oxford and Delhi. He is twenty-eight years old and splits his time be-tween running a consultancy in England, and working for charities and teaching English in India. How to Kidnap the Rich, his first novel, was written in the hundred degree-plus heat of New Delhi.

“A satirical state-of-the-nation debut, which slices into the soul of contemporary Indian society. . . . This is a cinematic caper—HBO already holds film rights—and though Raina is highlighting expired dreams and inequality, he is always perceptive and playful. . . . Social commentary meets standup comedy, as with a biting wit reminiscent of Binyavanga Wainaina’s essay “How to Write About Africa” or Paul Beatty’s Booker-winner The Sellout, Raina stretches stereotype and cliche into incisive satire.” — The Guardian

“A rollicking urban adventure and a biting satire of inequality. . . . a highly entertaining first novel from a writer to watch.” — The Economist

“Rahul Raina’s voice crackles with wit and the affecting exuberance of youth. His ripping good story grabs you on page one and doesn’t let go, taking you on a monstrously funny and unpredictable wild ride through a thousand different Delhis at top speed. How To Kidnap the Rich roars with brilliance, freshness and so much heart.”   — Kevin Kwan, New York Times bestselling author of the Crazy Rich Asians trilogy and Sex and Vanity

“Wildly entertaining. . . . the story of a poor, young protagonist who makes a lucrative business out of taking academic exams for the sons of India’s elite, then finds himself in the middle of a kaleidoscopic, LOL-funny caper.” — Real Simple

“Fans of My Sister the Serial Killer, Parasite and Crazy Rich Asians will be enthralled by this riotous tale from the very first line. . . . A hugely entertaining and unique debut.” — Cosmopolitan UK

“A lively first novel . . . . Genuine feeling flows beneath the potty-mouthed satire. . . .Raina suggests life may be ‘a relentless parade of fear,’ but it is far better to laugh than cry.” — Times (UK), "This Month's Best Crime Novels"

“Raina’s debut novel lives up to its billing as a fun caper and social satire thanks to strong characterization, a fast-paced plot, and an eye for the ridiculous. His delicious skewering of the social mores of Delhi’s über-rich and clear-eyed rendering of India’s social hierarchy propel sheer entertainment into striking elucidation in the mode of Aravind Adiga.” — Booklist (starred review)

“A sparkling debut about a crooked college consultant and his inadvertent role in the making of a celebrity. . . . Readers will enjoy the ride.” — Publishers Weekly

“Rahul Raina’s debut could easily be called How to Kidnap the Reader, because he entraps you from the first page, and skillfully maintains his hold on you with a story that is equal parts hypnotizing, harrowing, and hilarious in the way it lays bare the costs that many have to pay in order to succeed. From the privileged to the impoverished, Raina renders his world’s nuances, complexities, and evident truths with surgical precision and so much damn heart.” — Mateo Askaripour, New York Times bestselling author of Black Buck

"Unlike his enterprising protagonist, Rahul Raina takes no prisoners. . . . A bold, lively, and scathing satire that refuses to flinch." — Daniel Nieh, author of Beijing Payback

"Unflinching."  — Diksha Basu, author of Destination Wedding and The Windfall

“Rahul Raina’s roistering, whip-smart and deliciously fun Delhi-set crime caper, How to Kidnap the Rich, is the first great state-of-the-subcontinent novel of the 21st century.” — The Bookseller (UK)

“I can't remember the last time I read such an assured debut. Raina writes like he's been doing this all his life. Ladies and gentlemen, it's time to welcome a new star to the world of international crime fiction.” — Abir Mukherjee, author of A Rising Man

"Brutally funny and fast-paced, this debut from Rahul Raina proves he is a star in the making." — Nikesh Shukla, author of Coconut Unlimited