For the Ride (Penguin Poets) (Paperback) 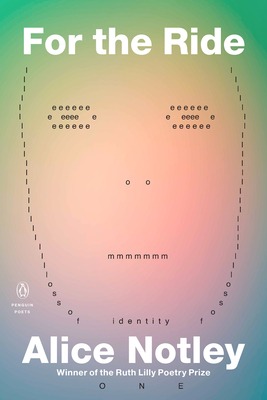 A major new book-length visionary poem from a writer "whose poems are among the major astonishments of contemporary poetry" (Robert Polito, the Poetry Foundation)

Alice Notley has become one of the most highly regarded figures in American poetry, a master of the visionary mode acclaimed for genre-bending, book-length poems of great ambition and adventurousness. Her newest book, For the Ride, is another such work. The protagonist, "One," is suddenly within the glyph, whose walls project scenes One can enter, and One does so. Other beings begin to materialize, and it seems like they (and One) are all survivors of a global disaster. They board a ship to flee to another dimension; they decide what they must save on this Ark are words, and they gather together as many as are deemed fit to save. They "sail" and meanwhile begin to change the language they are speaking, before disembarking at an abandoned future city.

Alice Notley was born in Bisbee, Arizona, in 1945 and grew up in Needles, California. She is the author of more than thirty-five books of poetry, including Mysteries of Small Houses (Penguin, 1998, winner of the Los Angeles Times Book Prize and a finalist for the Pulitzer Prize); Disobedience (Penguin, 2001, winner of the Griffin Prize); and Grave of Light: New and Selected Poems 1970-2005, which received the Lenore Marshall Poetry Prize. Her honors also include an Academy Award in Literature from the American Academy of Arts and Letters and the Shelley Memorial Award from the Poetry Society of America. She lives and works in Paris.

Praise for For the Ride:

“With its mess of divergent voices, picture-poems, and eccentric locutions, [For the Ride] is baffling, beautiful, and always fascinatingly Notley . . . It’s refreshing to read poetry so dedicated to its own ends . . . as long as conformity threatens, Notley will continue to push against it, or perhaps simply beyond it. Her work warns of the ways in which our civilization and its conventional stories have failed us, but it’s also a reminder that the endless resources of language remain for those who have a little nerve.” —David Wallace, The New Yorker

“Alice Notley’s best work feels […] intensely recursive, almost too good to read . . . There is joy throughout the book, in Notleyish lines like ‘Stars look like the word stars, / really do … and sparkle is better as its word.’ I love that.” —Elisa Gabbert, The New York Times Book Review

“[For the Ride] is both challenging and rewarding, punctuating a remarkably long and quietly rebellious poetic career with an ellipsis of sorts, as it gestures to what has come before it, while also erasing or replacing it . . . [Notley's poetry] leaves the reader not with a sense of discovery but of setting out on a search which each work refuses to end . . . The fact that the book is published at this particular historical moment means it will always remind us that, at best, we are ‘not some parts’, as the global dimensions of the pandemic highlight both human interconnectedness, and the ache of separation.” —The Times Literary Supplement

“[For the Ride] is a postapocalyptic adventure into an unspecified future . . . [that] quickly accelerates into a trans-dimensional and gender-defying odyssey . . . A challenging, visionary work.” —Publishers Weekly (starred review)

“Alice Notley is a disobedient medium: the dead speak through her and she speaks back. Sometimes she’s a poet of intimate address, sometimes of epic sweep. Notley’s formal experiments allow us to make contact with poetry’s originary and anarchic force.” —Ben Lerner, National Book Award finalist and author of No Art

“Written in a breathless e.e. cummings style, the poem fractures the rules of spelling, grammar, syntax, and formal poetry . . . it also brims with fresh, vibrant metaphors and irony, not the least being the religious innuendos that permeate the text. For sophisticated readers of poetry.” —Library Journal