When Two Feathers Fell From The Sky (Hardcover) 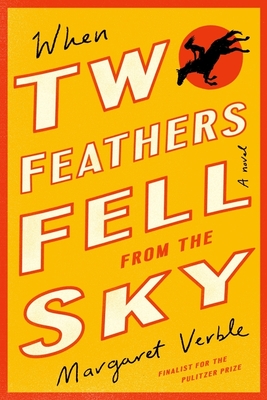 Louise Erdrich meets Karen Russell in this deliciously strange and daringly original novel from Pulitzer Prize finalist Margaret Verble: set in 1926 Nashville, it follows a death-defying young Cherokee horse-diver who, with her companions from the Glendale Park Zoo, must get to the bottom of a mystery that spans centuries.


Two Feathers, a young Cherokee horse-diver on loan to Glendale Park Zoo from a Wild West show, is determined to find her own way in the world. Two’s closest friend at Glendale is Hank Crawford, who loves horses almost as much as she does. He is part of a high-achieving, land-owning Black family. Neither Two nor Hank fit easily into the highly segregated society of 1920s Nashville.

When disaster strikes during one of Two’s shows, strange things start to happen at the park. Vestiges of the ancient past begin to surface, apparitions appear, and then the hippo falls mysteriously ill. At the same time, Two dodges her unsettling, lurking admirer and bonds with Clive, Glendale’s zookeeper and a World War I veteran, who is haunted—literally—by horrific memories of war. To get to the bottom of it, an eclectic cast of park performers, employees, and even the wealthy stakeholders must come together, making When Two Feathers Fell from the Sky an unforgettable and irresistible tale of exotic animals, lingering spirits, and unexpected friendship.

MARGARET VERBLE is an enrolled citizen of the Cherokee Nation of Oklahoma. Her first novel, Maud’s Line, was a finalist for the Pulitzer Prize. Her second novel, Cherokee America, has recently been listed by the New York Times as one of the 100 Notable Books of the Year for 2019. She lives in Lexington, Kentucky.

“Through a joyful interweaving of pragmatic storytelling and spiritual realism, Pulitzer Prize finalist Margaret Verble breathes life into a bygone era…Combining meticulous research, a fresh point-of-view and vivid imagery, Verble’s third novel does what historical fiction does best: folds a compelling story into a snapshot of time before life changed.” — Atlanta Journal-Constitution

“In this fun, entertaining and highly informative historical novel, award-winning author Margaret Verble, a citizen of the Cherokee Nation, surrounds Two Feathers’ story with a concise history of the area and an in-depth look at the social culture and mores of the times… [Verble] will have you believing and cheering...Great fun.” — Florida Times-Union

“Alternatively funny and touching, this novel has a distinctly original and unconventional feel.” — Ms. magazine

“Verble beautifully weaves period details with the cast’s histories, and enthralls with the supernatural elements, which are made as real for the reader as they are for the characters. This lands perfectly.” — Publishers Weekly (starred review)