What Money Can't Buy: The Moral Limits of Markets (Paperback) 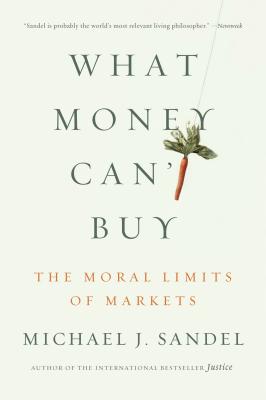 Managing a breezy tone while tackling an important topic (the limits of free-market capitalism and how its proliferation has changed the ways we interact with each other), What Money Can't Buy becomes more relevant every day.

In What Money Can't Buy, renowned political philosopher Michael J. Sandel rethinks the role that markets and money should play in our society.

Should we pay children to read books or to get good grades? Should we put a price on human life to decide how much pollution to allow? Is it ethical to pay people to test risky new drugs or to donate their organs? What about hiring mercenaries to fight our wars, outsourcing inmates to for-profit prisons, auctioning admission to elite universities, or selling citizenship to immigrants willing to pay?

In his New York Times bestseller What Money Can't Buy, Michael J. Sandel takes up one of the biggest ethical questions of our time: Isn't there something wrong with a world in which everything is for sale? If so, how can we prevent market values from reaching into spheres of life where they don't belong? What are the moral limits of markets?

Over recent decades, market values have crowded out nonmarket norms in almost every aspect of life. Without quite realizing it, Sandel argues, we have drifted from having a market economy to being a market society.

In Justice, an international bestseller, Sandel showed himself to be a master at illuminating, with clarity and verve, the hard moral questions we confront in our everyday lives. Now, in What Money Can't Buy, he provokes a debate that's been missing in our market-driven age: What is the proper role of markets in a democratic society, and how can we protect the moral and civic goods that markets do not honor and money cannot buy?

Michael J. Sandel teaches political philosophy at Harvard University. His books What Money Can’t Buy: The Moral Limits of Markets and Justice: What’s the Right Thing to Do? were international best sellers and have been translated into 27 languages. Sandel’s legendary course “Justice” was the first Harvard course to be made freely available online and has been viewed by tens of millions. His BBC series “The Public Philosopher” explores the philosophical ideas lying behind the headlines with participants from around the world.

“Michael Sandel's What Money Can't Buy is a great book and I recommend every economist to read it, even though we are not really his target audience. The book is pitched at a much wider audience of concerned citizens. But it taps into a rich seam of discontent about the discipline of economics.... The book is brimming with interesting examples which make you think.... I read this book cover-to-cover in less than 48 hours. And I have written more marginal notes than for any book I have read in a long time.” —Timothy Besley, Journal of Economic Literature

“Brilliant, easily readable, beautifully delivered and often funny. . . an indispensable book on the relationship between morality and economics.” —David Aaronovitch, The Times (London)

“In a culture mesmerized by the market, Sandel's is the indispensable voice of reason…. What Money Can't Buy. . . must surely be one of the most important exercises in public philosophy in many years.” —John Gray, New Statesman

“[An] important book. . . Michael Sandel is just the right person to get to the bottom of the tangle of moral damage that is being done by markets to our values.” —Jeremy Waldron, The New York Review of Books

“The most famous teacher of philosophy in the world, [has] shown that it is possible to take philosophy into the public square without insulting the public's intelligence. . .[He] is trying to force open a space for a discourse on civic virtue that he believes has been abandoned by both left and right.” —Michael Ignatieff, The New Republic

“[Sandel]is such a gentle critic that he merely asks us to open our eyes. . . Yet What Money Can't Buy makes it clear that market morality is an exceptionally thin wedge. . . Sandel is pointing out. . . [a] quite profound change in society.” —Jonathan V. Last, The Wall Street Journal

“What Money Can't Buy is the work of a truly public philosopher. . . [It] recalls John Kenneth Galbraith's influential 1958 book, The Affluent Society. . .Galbraith lamented the impoverishment of the public square. Sandel worries about its abandonment--or, more precisely, its desertion by the more fortunate and capable among us. . .[A]n engaging, compelling read, consistently unsettling. . . it reminds us how easy it is to slip into a purely material calculus about the meaning of life and the means we adopt in pursuit of happiness.” —David M. Kennedy, Democracy: A Journal of Ideas

“[Sandel] is currently the most effective communicator of ideas in English.” —The Guardian

“Michael Sandel is probably the most popular political philosopher of his generation. . .The attention Sandel enjoys is more akin to a stadium-filling self-help guru than a philosopher. But rather than instructing his audiences to maximize earning power or balance their chakras, he challenges them to address fundamental questions about how society is organized. . . His new book [What Money Can't Buy] offers an eloquent argument for morality in public life.” —Andrew Anthony, The Observer (London)

“What Money Can't Buy is replete with examples of what money can, in fact, buy. . . Sandel has a genius for showing why such changes are deeply important.” —Martin Sandbu, Financial Times

“One of the leading political thinkers of our time…. Sandel's new book is What Money Can't Buy: The Moral Limits of Markets, and I recommend it highly. It's a powerful indictment of the market society we have become, where virtually everything has a price.” —Michael Tomasky, The Daily Beast

“To understand the importance of [Sandel's] purpose, you first have to grasp the full extent of the triumph achieved by market thinking in economics, and the extent to which that thinking has spread to other domains. This school sees economics as a discipline that has nothing to do with morality, and is instead the study of incentives, considered in an ethical vacuum. Sandel's book is, in its calm way, an all-out assault on that idea…. Let's hope that What Money Can't Buy, by being so patient and so accumulative in its argument and its examples, marks a permanent shift in these debates.” —John Lancaster, The Guardian

“Sandel is among the leading public intellectuals of the age. He writes clearly and concisely in prose that neither oversimplifies nor obfuscates…. Sandel asks the crucial question of our time: ‘Do we want a society where everything is up for sale? Or are there certain moral and civic goods that markets do not honor and money cannot buy?'” —Douglas Bell, The Globe and Mail (Toronto)

“Deeply provocative and intellectually suggestive…. What Sandel does…is to prod us into asking whether we have any reason for drawing a line between what is and what isn't exchangeable, what can't be reduced to commodity terms…. [A] wake-up call to recognize our desperate need to rediscover some intelligible way of talking about humanity.” —Rowan Williams, Prospect

“There is no more fundamental question we face than how to best preserve the common good and build strong communities that benefit everyone. Sandel's book is an excellent starting place for that dialogue.” —Kevin J. Hamilton, The Seattle Times

“Poring through Harvard philosopher Michael Sandel's new book. . . I found myself over and over again turning pages and saying, 'I had no idea.' I had no idea that in the year 2000, 'a Russian rocket emblazoned with a giant Pizza Hut logo carried advertising into outer space.'. . . I knew that stadiums are now named for corporations, but had no idea that now 'even sliding into home is a corporate-sponsored event.'. . . I had no idea that in 2001 an elementary school in New Jersey became America's first public school 'to sell naming rights to a corporate sponsor.' Why worry about this trend? Because, Sandel argues, market values are crowding out civic practices.” —Thomas Friedman, New York Times

“In his new book, Michael Sandel --the closest the world of political philosophy comes to a celebrity -- argues that we now live in a society where ‘almost everything can be bought and sold.' As markets have infiltrated more parts of life, Sandel believes we have shifted from a market economy to ‘a market society,' turning the world -- and most of us in it -- into commodities. And when Sandel proselytizes, the world listens…. Sandel's ideas could hardly be more timely.” —Rosamund Urwin, Evening Standard (London)