The First Tycoon: The Epic Life of Cornelius Vanderbilt (Hardcover) 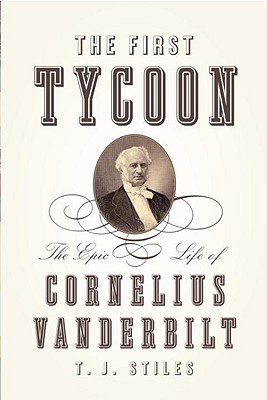 By T.J. Stiles
$45.00
NOT CURRENTLY IN THE STORE - Hard to Find - We Will Research Availability and Get Back to You

A gripping, groundbreaking biography of the combative man whose genius and force of will created modern capitalism.

Founder of a dynasty, builder of the original Grand Central, creator of an impossibly vast fortune, Cornelius “Commodore” Vanderbilt is an American icon. Humbly born on Staten Island during George Washington’s presidency, he rose from boatman to builder of the nation’s largest fleet of steamships to lord of a railroad empire. Lincoln consulted him on steamship strategy during the Civil War; Jay Gould was first his uneasy ally and then sworn enemy; and Victoria Woodhull, the first woman to run for president of the United States, was his spiritual counselor. We see Vanderbilt help to launch the transportation revolution, propel the Gold Rush, reshape Manhattan, and invent the modern corporation—in fact, as T. J. Stiles elegantly argues, Vanderbilt did more than perhaps any other individual to create the economic world we live in today.

In The First Tycoon, Stiles offers the first complete, authoritative biography of this titan, and the first comprehensive account of the Commodore’s personal life. It is a sweeping, fast-moving epic, and a complex portrait of the great man. Vanderbilt, Stiles shows, embraced the philosophy of the Jacksonian Democrats and withstood attacks by his conservative enemies for being too competitive. He was a visionary who pioneered business models. He was an unschooled fistfighter who came to command the respect of New York’s social elite. And he was a father who struggled with a gambling-addicted son, a husband who was loving yet abusive, and, finally, an old man who was obsessed with contacting the dead.

The First Tycoon is the exhilarating story of a man and a nation maturing together: the powerful account of a man whose life was as epic and complex as American history itself.

T. J. Stiles has held the Gilder Lehrman Fellowship in American History at the Dorothy and Lewis B. Cullman Center for Scholars and Writers at the New York Public Library, taught at Columbia University, and served as adviser for the PBS series The American Experience. His first book, Jesse James: Last Rebel of the Civil War, won the Ambassador Book Award and the Peter Seaborg Award for Civil War Scholarship, and was a New York Times Notable Book. He has written for The New York Times Book Review, Salon.com, Smithsonian, and the Los Angeles Times. He lives in San Francisco.

“A penetrating portrait of a complex, self-made titan.”
-Citation for the Pulitzer Prize in Biography 2010

“With deep and imaginative research and graceful writing, T. J. Stiles’s The First Tycoon tells the extraordinary story of a brutally competitive man who was hard to love but irresistibly interesting as a truly pivotal historical figure. With few letters and no diaries, and with layers of legend to carve through, Stiles captures Cornelius Vanderbilt as a person and as a force who shaped the transportation revolution, all but invented unbridled American capitalism, and left his mark not only all over New York City but, for better or worse, all over our economic landscape.”
-Citation for the National Book Award in Nonfiction 2009

“T.J. Stiles presents the magnate as a man in full.”
-Boston Globe Best Books of 2009

“Stiles writes with care and panache about the quintessential ‘robber baron,’ a man widely revered as well as hated.”
-The New York Times 100 Notable Books of 2009

“A definitive biography . . . Stiles brings the Commodore, warts and all, to life in this new study, which is at once up-to-date in scholarly terms, analytically incisive, and lucidly written.”
-Raleigh News and Observer Best Books of 2009

“At long last a biography worthy of the Commodore, meticulously researched, superbly written, and filled with original insights.”
-Maury Klein, author of The Life and Legend of Jay Gould

“T.J. Stiles writes with the magisterial sweep of a great historian and the keen psychological insight of a great biographer. The First Tycoon is the fullest, most perceptive chronicle ever written of the life and times of Cornelius Vanderbilt, the epitome of unfettered, winner-take-all capitalism. With panache and admirable ease, Stiles maps the financial and political currents on which Vanderbilt buccaneered and shows that it was Vanderbilt, more than anyone else, who enabled business to evolve into Big Business.”
-Patricia O’Toole, author of When Trumpets Call: Theodore Roosevelt After the White House

“T.J. Stiles has given us a balanced and absorbing biography of this colorful and often ruthless entrepreneur, the first of the ‘robber barons’ who transformed the American economy in the nineteenth century.”
-James M. McPherson, author of Battle Cry of Freedom: The Civil War Era

“The First Tycoon is a brilliant exposition of the life of Cornelius Vanderbilt and the entrepreneurial environment that he shaped. Readers will look at Grand Central Station and much else in American life with fresh eyes.”
-Joyce Appleby, author of The Restless Revolution: A History of Capitalism

“The definitive biography of Commodore Vanderbilt. Both as portrait of an American original and as a book that brings to life an important slice of American history long neglected, this is biography at its very best. A magnificent achievement.”
-Arthur Vanderbilt II, author of Fortune’s Children: The Fall of the House of Vanderbilt

“In this whacking new biography of Vanderbilt, T. J. Stiles . . . demonstrates a brute eloquence of his own.  This is a mighty—and mighty confident—work, one that moves with force and conviction and imperious wit through Vanderbilt’s noisy life and times . . . I read eagerly and avidly.  This is state-of- the-art biography, crisper and more piquant than a 600-page book has any right to be.”
-Dwight Garner, The New York Times

“The illuminating, authoritative portrait of Vanderbilt that has been missing for so long.”
-Alice Schroeder, The Washington Post

“Very absorbing . . . [The First Tycoon] is in fact much more than a biography.  The book is filled with important, exhaustively researched and indeed fascinating details that would profit every student of American business and social history to read.”
-Richard M. Abrams, San Francisco Chronicle

“Perceptive and fluently written . . . Stiles writes with both the panache of a fine journalist and the analytical care of a seasoned scholar.  And he offers a fruitful way to think about the larger history of American elites as well as the life of one of their most famous members.”
-Michael Kazin, The New York Times Book Review

“Monumental and outrageously entertaining . . . Stiles writes in a style the Commdore would have appreciated: swift, economical and direct, daring but never hyperbolic.  The nearly 600 pages of text seem to fly through your hands . . . Stiles has a genuine gift for putting complex historical subjects into perspective without lapsing into revisionism.”
-Allen Barra, truthdig.com

“Monumental . . . Stiles has a gift for making readers admire unsavory characters. When I put down this arresting saga . . . I raised a toast to everything the old rascal did for the U.S. . . . [The First Tycoon] resembles a five-course meal at a three-star restaurant: rich and pleasurable.”
-James Pressley, Bloomberg.com

“Superbly written and researched . . . Worthy of its subject.”
-The Economist

“Sweeping . . . [A] magisterial, exemplary work . . . [that] offers entry into the storm-tossed world of our current tycoons and the rough waters they have piloted us into.”
-William Bergman, American History Magazine

“Superbly researched and elegantly written . . . Stiles’s will likely prove to be the definitive biography of this epic entrepreneur.”
-Martin Morse Wooster, Philanthropy Magazine

“Stiles has painted a full-bodied, nuanced picture of the man . . . Elegance of style and fair-minded intent illuminate Stiles’s latest . . . profound exploration of American culture in the raw.”
-Carlo Wolff, The Boston Globe

“The First Tycoon has been widely praised, and rightly so . . . [An] epic biography.”
-Sam Roberts, The New York Times

“Vanderbilt’s story is indeed epic, and so is The First Tycoon . . . Stiles is a perceptive and witty writer with a remarkable ability to paint a picture of the America in which Vanderbilt lived.”
-Randy Dotinga, The Christian Science Monitor

“Shrewd . . . As he did in his much-acclaimed Jesse James, Stiles limns the meteoric career of an impetuous spirit.  Rich in detail, the narrative reveals much about not only the unschooled genius . . . but also the national culture he helped transform . . . A landmark study.”
-Starred review, Booklist