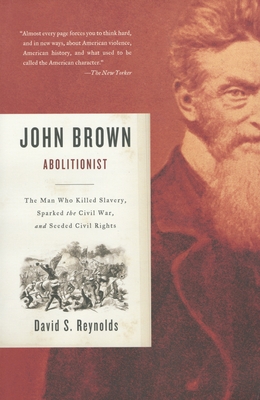 By David S. Reynolds
$18.95
NOT CURRENTLY IN THE STORE - Backordered - May Take Multiple Weeks

An authoritative new examination of John Brown and his deep impact on American history.Bancroft Prize-winning cultural historian David S. Reynolds presents an informative and richly considered new exploration of the paradox of a man steeped in the Bible but more than willing to kill for his abolitionist cause. Reynolds locates Brown within the currents of nineteenth-century life and compares him to modern terrorists, civil-rights activists, and freedom fighters. Ultimately, he finds neither a wild-eyed fanatic nor a Christ-like martyr, but a passionate opponent of racism so dedicated to eradicating slavery that he realized only blood could scour it from the country he loved. By stiffening the backbone of Northerners and showing Southerners there were those who would fight for their cause, he hastened the coming of the Civil War. This is a vivid and startling story of a man and an age on the verge of calamity.

David S. Reynolds is Distinguished Professor of English and American Studies at the Graduate Center and Baruch College of the City University of New York. He received his B.A. from Amherst College and his Ph.D. from the University of California, Berkeley. He has taught at Rutgers University, New York University, Barnard College, and Northwestern University. His Walt Whitman's America won the Bancroft Prize, the Ambassador Book Award, and was a finalist for the National Book Critics Circle Award. Beneath the American Renaissance won Phi Beta Kappa's Christian Gauss.