Mermaids in Paradise: A Novel (Paperback) 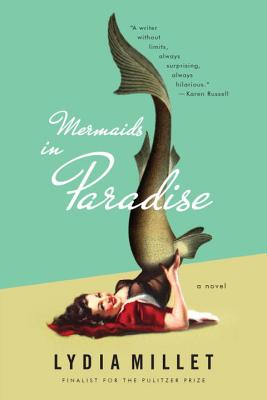 Perfectly balanced between laughable and likely, Millet's novel is hilariously absurd but never loses sign of the humanity (mermanity?) at the heart of the story.

In this “comic masterpiece” (Salon), honeymooners Deb and Chip—our opinionated, skeptical narrator and her cheerful jock husband—befriend a marine biologist who discovers mermaids in a coral reef. As a resort chain swoops in to exploit the shy creatures, the newlyweds unite with other adventurous vacationers to stop the company from turning the reef into a theme park. Mermaids in Paradise is Lydia Millet’s most fun book yet, tempering the sharp satire of her early career with the empathy and subtlety of her more recent novels and short stories.

Lydia Millet is the author of A Children's Bible, a finalist for the National Book Award and a New York Times Top 10 book of 2020, among other works of fiction. She has won awards from PEN Center USA and the American Academy of Arts and Letters and been shortlisted for the National Book Award, National Book Critics Circle Award, and Los Angeles Times Book Prize. Her story collection Love in Infant Monkeys was a Pulitzer Prize finalist. She lives in Tucson, Arizona.

A writer without limits, always surprising, always hilarious.
— Karen Russell, author of Swamplandia! and Orange World and Other Stories

Mermaids in Paradise makes brilliant comedy out of a honeymoon trip that veers from the absurd to the sublime and back again. Lydia Millet is a stone-cold genius.

— Jenny Offill, author of Dept. of Speculation and Weather

Lydia Millet is the American writer with the funniest, wisest grasp on how we fool ourselves.
— Charles Finch - Chicago Tribune

A romp with sharp teeth…a slapstick variation on Millet’s abiding theme: the relationship between human beings and the natural world.
— Laura Miller - Salon

Millet, with her keen sense of the absurd, brings the book to a surprising conclusion, and makes a point about corporate greed and the destruction of the environment without being heavy-handed.
— Moira Hodgson - Wall Street Journal

[A] laser-focused satire…The novel has the shape and pace of a thriller… An admirable example of a funny novel with a serious message that works swimmingly. Dive in.
— Kirkus Reviews (starred review)