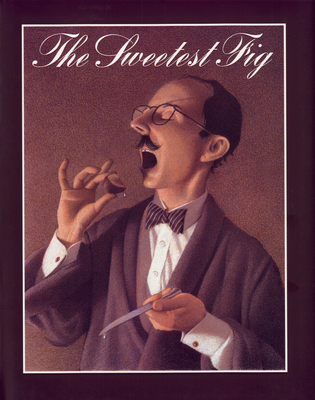 By Chris Van Allsburg
$19.99
On Our Shelves Now

"These figs are very special," the woman whispered. "They can make your dreams come true." -- Thus Monsieur Bibot, the cold-hearted dentist, was given two ordinary-looking figs as payment for extracting a tooth from an old woman's mouth. Monsieur Bibot refused to believe such nonsense and proceeded to eat one of the figs for a bedtime snack. Although it was possibly the finest, sweetest fig he had ever tasted, it wasn't until the next morning that Monsieur Bibot realized it indeed had the power to make his dreams come true. While dragging his poor dog, Marcel, out for his walk, he discovered that his strange dream from the night before was becoming all too real. Determined to make good use of the second fig, Monsieur Bibot learns to control is dreams. But can he control Marcel? Once again Chris Van Allsburg explores the mysterious territory between fantasy and reality in an uncanny tale that will intrigue readers of all ages.

Chris Van Allsburg is the winner of two Caldecott Medals, for Jumanji and The Polar Express, as well as the recipient of a Caldecott Honor Book for The Garden of Abdul Gasazi. The author and illustrator of numerous picture books for children, he has also been awarded the Regina Medal for lifetime achievement in children’s literature. In 1982, Jumanji was nominated for a National Book Award and in 1996, it was made into a popular feature film. Chris Van Allsburg is a former instructor at the Rhode Island School of Design. Visit him at chrisvanallsburg.com.

"Van Allsburg swings back into his most mystifying mode with this enigmatic, visually sophisticated tale . . . A significant achievement." Publishers Weekly, Starred