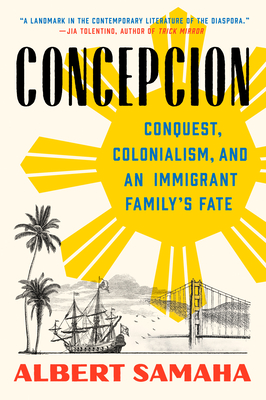 “Absolutely extraordinary...A landmark in the contemporary literature of the diaspora.” —Jia Tolentino, author of Trick Mirror

“If Concepcion were only about Samaha’s mother, it would already be wholly worthwhile. But she was one of eight children in the Concepcion family, whose ancestry Samaha traces in this. . . powerful book.” –The New York Times

Nearing the age at which his mother had migrated to the US, part of the wave of non-Europeans who arrived after immigration quotas were relaxed in 1965, Albert Samaha began to question the ironclad belief in a better future that had inspired her family to uproot themselves from their birthplace. As she, her brother Spanky—a rising pop star back in Manila, now working as a luggage handler at San Francisco airport—and others of their generation struggled with setbacks amid mounting instability that seemed to keep prosperity ever out of reach, he wondered whether their decision to abandon a middle-class existence in the Philippines had been worth the cost.

Tracing his family’s history through the region’s unique geopolitical roots in Spanish colonialism, American intervention, and Japanese occupation, Samaha fits their arc into the wider story of global migration as determined by chess moves among superpowers. Ambitious, intimate, and incisive, Concepcion explores what it might mean to reckon with the unjust legacy of imperialism, to live with contradiction and hope, to fight for the unrealized ideals of an inherited homeland.

Albert Samaha is an investigative journalist and inequality editor at BuzzFeed News. A Whiting Foundation Creative Nonfiction Grant recipient, he is also the author of Never Ran, Never Will: Boyhood and Football in a Changing American Inner City, which was a finalist for the 2019 PEN/ESPN Award for Literary Sports Writing. He lives in Brooklyn.

“If Concepcion were only about Samaha’s mother, it would already be wholly worthwhile. But she was one of eight children in the Concepcion family, whose ancestry Samaha traces in this. . . powerful book.” –The New York Times

“At the bighearted center of Concepcion is Samaha’s desire ‘to honor my elders.' . . . He succeeds ably, putting a human face and history on a. . . community largely left out of the Asian American canon and U.S. literature generally.” –The New York Times Book Review

“Informative but approachable, heartbreaking but hopeful. . . Concepcion speaks to the inherently human desire to build something better.” –Buzzfeed

“A sprawling and impressive work…[Samaha] unearths a wealth of documentation that runs counter to the kinder, gentler version of American history we’re taught in school.” –San Francisco Chronicle

“An extraordinary feat of personal, family, and colonial history. . . . Samaha switches seamlessly from the epic to the extremely intimate.” –Philippine Daily Inquirer

“Extraordinary . . . an evocative window into global issues of immigration and American imperialism. . . . [and] an extraordinary look at the freedoms and perils of making a new life in America.” –Publishers Weekly (starred)

“An expansive view of Filipino history and the experiences of Filipino immigrants . . . that provides an intimate perspective on the legacy of colonialism.” —Kirkus Reviews (starred)

“A captivating, thoughtful, classification-defying read. . . . [An] insightful, fresh perspective [on] immigration, history, and what it means to be American, all so fascinating and engagingly shared.” –Booklist

“Surprising and complex … Samaha plants [his relatives’] stories alongside his own and grows a remarkable family tree.” —BookPage

“Absolutely extraordinary—a sweeping story of global power and movement, told through the intimate reality of one Filipino family’s centuries-long quest for self-determination within the grip of empire. A landmark in the contemporary literature of the diaspora. My admiration for it knows no bounds.” —Jia Tolentino, author of Trick Mirror

“An odyssey of history and memory across decades and countries, Concepcion excavates and astounds. Illuminating and epic, a revelation.” —Bryan Washington, author of Lot and Memorial

“For those of us who have admired Samaha's journalism for so long, this jarringly beautiful memoir is the book we've been waiting for. Simply a joy to read.” —Daniel Alarcón, author of Lost City Radio and At Night We Walk in Circles

“Concepcion brilliantly captures the legacy of conquest, the absurdity of empire, and the life-altering reverberations of the American myth. A rollicking, heartfelt, and profoundly edifying epic.” —Francisco Cantú, author of The Line Becomes a River

“A gorgeous, cinematic epic about how an immigrant family becomes American, and the unfathomable losses they bear in pursuit of the dream.”  –Adam Serwer, author of The Cruelty Is the Point

“Surprising, uplifting, and tragic, at once a history of the Filipino immigrant experience in the United States and a deeply personal family memoir full of hope and loss. What a perfect book.” –Scaachi Koul, author of One Day We'll All Be Dead and None of This Will Matter

“A wonder of a book, Concepcion should be required reading for anyone who thinks they know anything about America’s past, or wants to understand its present and future.”  –Elaine Castillo, author of America Is Not the Heart