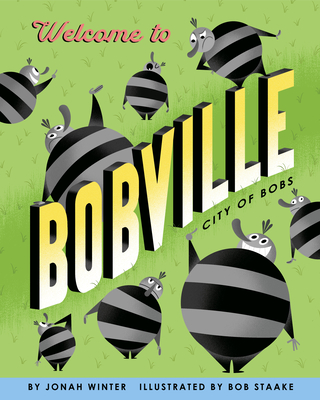 By Jonah Winter, Bob Staake (Illustrator)
$17.99
On Our Shelves Now

Here's a timely, hilarious picture book, with Seussian appeal! In Bobville, everyone is named...yup, Bob...and everything is exactly the same--until one Bob decides he'd like to be a Bruce.

Welcome to Bobville, home to people only named Bob! In Bobville, the Bobs eat the same food, wear the same clothes, watch the same movies, and have the same hobbies. They agree on everything-- ESPECIALLY that they don't like anyone who isn't named Bob. The Bobs go about their Bob ways, until one day, to the surprise of the entire city, one resident decides he wants to do things a little differently, and live as Bruce. In response, the Bobs build a wall to keep Bruce, and anyone else who dares to be different, out of the city. But Bruce doesn't mind-- it turns out the diverse world outside of Bobville is actually very beautiful. In this timely picture book, bestselling author Jonah Winter and acclaimed illustrator Bob Staake explore how exclusion and walls breed intolerance, and how being different and open-minded enriches our lives and the world.

Jonah Winter has written more than thirty highly acclaimed books for children, including the recently published The Sad Little Fact and Elvis is King. His other books include The Secret Project, which received five starred reviews; Mickey Mantle: The Commerce Comet; Lillian's Right to Vote, which received four starred reviews; and You Never Heard of Casey Stengel?!, called "inspired" by the New York Times Book Review. Booklist called his most recent publication Thurgood "a memorable portrait of a legal giant" in a starred review. Learn more at jonahwinter.com.

Bob Staake has authored and/or illustrated over 50 books, including The Book of Gold and Bluebird, which received three starred reviews; My Pet Book; The Donut Chef; and Look! a Book! The New York Times named Staake's The Red Lemon one of the ten best illustrated books of the year. Learn more at BobStaake.com.

Praise for Welcome To Bobville:

“A clever look at tolerance and understanding.” —Kirkus Reviews

“A reminder of the importance of independent thinking and the joy of being different wrapped in a silly yet empowering tale.” —The Horn Book

“There are lots of books lately about celebrating differences and condemning intolerance. This title is a carefree addition to the canon that is simply a celebration of how silly it would be for us all to be the same.” —School Library Journal

"Winter and Collier have created a catalyst that will inspire readers to learn more about this giant of American history." —Publishers Weekly, Starred Review

“A memorable portrait of a legal giant.” —Booklist, Starred Review

“Informative, inspiring, and exciting. . . . A fervent celebration of a man whose work improved the lives of millions of Americans.” —School Library Journal, Starred Review

"Staake works out an impressive range of emotion... Without use of a single word, this book raises all kinds of simple profundities for kids to question, ponder, imagine, and discuss." —Booklist, Starred Review

“…believers and skeptics alike will find something deeply impressive and moving in this work of a singular, fully committed talent.” —Publishers Weekly, Starred Review

“Like nothing you have seen before.” —Kirkus Review, Starred Review