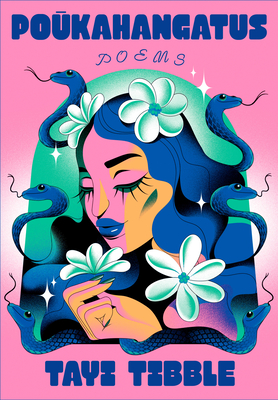 The American debut of an acclaimed young poet as she explores her identity as a twenty-first-century Indigenous woman. Poem by poem, Tibble carves out a bold new way of engaging history, of straddling modernity and ancestry, desire and exploitation.

Intimate, moving, virtuosic, and hilarious, Tayi Tibble is one of the most exciting new voices in poetry today. In Poūkahangatus (pronounced “Pocahontas”), her debut volume, Tibble challenges a dazzling array of mythologies—Greek, Māori, feminist, kiwi—peeling them apart, respinning them in modern terms. Her poems move from rhythmic discussions of the Kardashians, sugar daddies, and Twilight to exquisite renderings of the natural world and precise emotions (“The lump in her throat swelled like a sea that threatened to take him from her, and she had to swallow hard”). Tibble is also a master narrator of teenage womanhood, its exhilarating highs and devastating lows; her high-camp aesthetics correlate to the overflowing beauty, irony, and ruination of her surroundings.

These are warm, provocative, and profoundly original poems, written by a woman for whom diving into the wreck means taking on new assumptions—namely, that it is not radical to write from a world in which the effects of colonization, land, work, and gender are obviously connected. Along the way, Tibble scrutinizes perception and how she as a Māori woman fits into trends, stereotypes, and popular culture. With language that is at once colorful, passionate, and laugh-out-loud funny, Poūkahangatus is the work of one of our most daring new poets.

TAYI TIBBLE (Te Whānau ā Apanui/Ngāti Porou) was born in 1995 and lives in Wellington, New Zealand. In 2017, she completed a master’s degree in creative writing from the International Institute of Modern Letters, Victoria University of Wellington, where she was the recipient of the Adam Foundation Prize in Creative Writing. Her second book of poetry, Rangikura, will be published in the United States in 2023.

A New Yorker and GOODREADS Best Book of the Year

“Tibble writes wittily of the hunger games of adolescence. . . . However lost their youthful personas, these wise poems know exactly where they are heading.”—David Wheatley, The Guardian

“Tibble’s smart, sexy, slang-studded verse is fanciful and dramatic, reveling in the pains and the pleasures of contemporary young womanhood yet undergirded by an acute sense of history. Her voice remains sure-footed across many registers, and the book, at its best, functions as an atlas for learning to explore the world on one’s own terms.”—The New Yorker

“In Tibble’s seismic debut, the young poet’s rollicking, indignant, and invigorating narratives contend with history and navigate what it means to be millennial, female, and of Māori descent. Tibble stares unblinkingly at bigotry, her ferocity consuming the male, white, evangelical gaze she encounters. . . . Tibble’s kinetic use of language makes this an exciting and memorable debut.”—Publishers Weekly (starred review)

“Mordantly funny and often devastating, on everything from the settler colonial afterlife of New Zealand to the conflicted feeling of seeing Indigenous actresses play disposable characters in Game of Thrones.”—Elaine Castillo, Alta

“A beautiful debut . . . The poems are purposeful and meaningful, with such incredible wit and graphic, gorgeous honesty. . . . A lighthouse for anyone grasping at the open threads of all their many selves.”—Anna Cafolla, The Face

“A fearless, young new voice with a huge range, from history to pop culture, with that sense of joy in its own word-music which immediately heralds the start of a poetic and political journey. Along with Hera Lindsay Bird, Tayi Tibble adds excitement to the new poetry coming from New Zealand.”—Carol Ann Duffy, former British Poet Laureate and author of The Bees

“Tayi Tibble is one of the most startling and original poets of her generation. Her poetry makes doorways of insight into turbulent history. At the end, there we are, all standing together, listening.”—Joy Harjo, U.S. Poet Laureate and author of An American Sunrise

“Tayi Tibble’s Poūkahangatus hurls us into a lush biome of sensual density—the smell of hair burning like ‘prayer candles,’ the surface of a lake ‘chewy like spoilt milk.’ That supersaturation makes the stark precision of Tibble’s well-placed revelations even more immobilizing. On fathers, Tibble writes: ‘I wish we could have watched them / fall in love / with our mothers.’ Then: ‘The only time your father ever hit you / was when you pointed your shotgun / in his direction.’ One feels in the presence of a singular, searching mind rigorously excavating its own psychospiritual station. Poūkahangatus is one of the most exciting debuts I’ve read in ages.”—Kaveh Akbar, author of Calling a Wolf a Wolf and Pilgrim Bell

“Tayi Tibble’s Poūkahangatus was an incredibly rhythmic and refreshing read! Ripe with dazzling imagery, culture and history, this collection offers readers a tale of identity, cross-generational references and so much more. Tibble’s rich language breathes new life into poetry and tethers readers to the history of the Māori people and the lasting impact of colonization. The writing screams, ‘I was here before & I’ll be back again!’ I’d suggest this book to every twenty-something trying to find their way!”—Roya Marsh, author of dayliGht: Poems