Chicago's Great Fire: The Destruction and Resurrection of an Iconic American City (Hardcover) 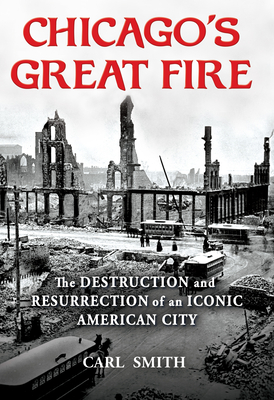 By Carl Smith
$28.00
NOT CURRENTLY IN THE STORE - Available to Order - Usually Arrives in Store in 1-5 Business Days!

From an acclaimed historian, the full and authoritative story of one of the most iconic disasters in American history, told through the vivid memories of those who experienced it

Between October 8-10, 1871, much of the city of Chicago was destroyed by one of the most legendary urban fires in history. Incorporated as a city in 1837, Chicago had grown at a breathtaking pace in barely three decades, from just over 4,000 in 1840 to greater than 330,000 at the time of the fire. Built hastily, the city was largely made of wood. Once it began in the barn of Catherine and Patrick O'Leary, the Fire quickly grew out of control, twice jumping branches of the Chicago River on its relentless northeastward path through the city's three divisions. Close to one of every three Chicago residents was left homeless and more were instantly unemployed, though the death toll was miraculously low.

Remarkably, no carefully researched popular history of the Great Chicago Fire has been written until now, despite it being one of the most cataclysmic disasters in US history. Building the story around memorable characters, both known to history and unknown, including the likes of General Philip Sheridan and Robert Todd Lincoln, eminent Chicago historian Carl Smith chronicles the city's rapid growth and place in America's post-Civil War expansion. The dramatic story of the fire--revealing human nature in all its guises--became one of equally remarkable renewal, as Chicago quickly rose back up from the ashes thanks to local determination and the world's generosity and faith in Chicago's future.

As we approach the fire's 150th anniversary, Carl Smith's compelling narrative at last gives this epic event its full and proper place in our national chronicle.

Carl Smith is Franklyn Bliss Snyder Professor of English and American Studies and Professor of History, Emeritus, at Northwestern University. His books include Chicago and the American Literary Imagination, 1880-1920; Urban Disorder and the Shape of Belief: The Great Chicago Fire, the Haymarket Bomb, and the Model Town of Pullman; The Plan of Chicago: Daniel Burnham and the Remaking of the American City; and City Water, City Life: Water and the Infrastructure of Ideas in Urbanizing Philadelphia, Boston, and Chicago.