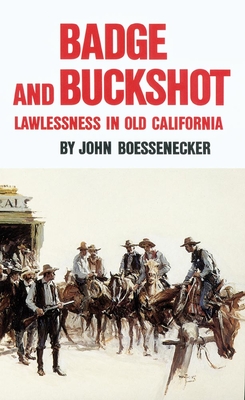 By John Boessenecker
$26.34
NOT CURRENTLY IN THE STORE - Available to Order - Usually Arrives in Store in 1-5 Business Days!

Badge and Buckshot is a comprehensive book at many of the once-famous peace officers and outlaws of Old California. Told here for the first time are the true stories of Ben Thorn, the iron-willed but scandal-plagued sheriff of Calaveras County; John C. Boggs, the fast-shooting nemesis of the Tom Bell and Rattlesnake Dick gangs; Ben and Dudley Johnson, the notorious "Tulare Twins"; Kid Thompson, whose train-robbing exploits took place just blocks from present-day Los Angeles film and television studios; and Coates-Frost feud, California's bloodiest vendetta, which endured more than twenty years and left fourteen men dead. Here, too, are the first complete accounts of Captain Ingram's Rangers, the band of Confederate guerrillas who raided stagecoaches in California during the Civil War; Steve Venard, the soft-spoken lawman who killed three outlaws in a single gunfight; and the legendary Bill Miner, whose career of banditry spanned almost half a century. The product of more than ten years of painstaking research, Badge and Buckshot recounts one of the forgotten sagas of the Old West, an action-packed tale of shoot-outs, stage holdups, manhunts, and lynchings. At the same time, through extensive use of pioneer newspaper files, court records, and previously unpublished illustrations, it shatters old myths and demonstrates the overall effectiveness of the criminal justice system in Old California. For authentic Americana, Badge and Buckshot is not to be missed. A San Francisco attorney, John Boessenecker has authored six books and numerous magazine articles on crime and law enforcement in the Old West. His most recent book is Bandido: The Life and Times of Tiburcio Vasquez, for which he was named Best Nonfiction Writer of 2011 by True West magazine.