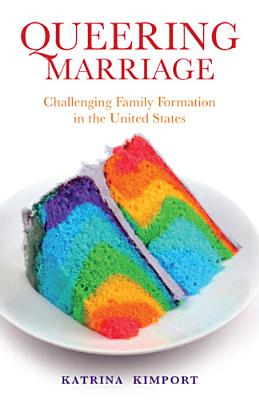 By Katrina Kimport
$132.00
NOT CURRENTLY IN THE STORE - Available to Order - Usually Arrives in Store in 1-5 Business Days!

Over four thousand gay and lesbian couples married in the city of San Francisco in 2004. The first large-scale occurrence of legal same-sex marriage, these unions galvanized a movement and reignited the debate about whether same-sex marriage, as some hope, challenges heterosexual privilege or, as others fear, preserves that privilege by assimilating queer couples.

In Queering Marriage, Katrina Kimport uses in-depth interviews with participants in the San Francisco weddings to argue that same-sex marriage cannot be understood as simply entrenching or contesting heterosexual privilege. Instead, she contends, these new legally sanctioned relationships can both reinforce as well as disrupt the association of marriage and heterosexuality.

During her deeply personal conversations with same-sex spouses, Kimport learned that the majority of respondents did characterize their marriages as an opportunity to contest heterosexual privilege. Yet, in a seeming contradiction, nearly as many also cited their desire for access to the normative benefits of matrimony, including social recognition and legal rights. Kimport’s research revealed that the pattern of ascribing meaning to marriage varied by parenthood status and, in turn, by gender. Lesbian parents were more likely to embrace normative meanings for their unions; those who are not parents were more likely to define their relationships as attempts to contest dominant understandings of marriage.

By posing the question—can queers “queer” marriage?—Kimport provides a nuanced, accessible, and theoretically grounded framework for understanding the powerful effect of heterosexual expectations on both sexual and social categories.

KATRINA KIMPORT is an associate professor in the Department of Obstetrics, Gynecology and Reproductive Sciences and a research sociologist with the Advancing New Standards in Reproductive Health (ANSIRH) program of the Bixby Center for Global Reproductive Health at the University of California, San Francisco. Her research examines the (re)production of social inequality, with a particular focus on gender, health, and reproduction. She is the author of  No Real Choice: How Culture and Politics Matter for Reproductive (Rutgers University Press) and coauthor of Digitally Enabled Social Change. She is the coauthor of Digitally Enabled Social Change.

"Queering Marriage is remarkable for its highly thoughtful insights into the real meaning of same-sex marriage. By telling the compelling stories of same-sex couples who participated in marriage ceremonies that played a powerful role in the movement toward marriage equality, sociologist Katrina Kimport brilliantly adjudicates competing contemporary views regarding the influence of same-sex marriage on both 'traditional marriage' and the gay and lesbian community. This beautifully written book is a must-read for any serious scholar of family, gender, sexuality, and social movements."
— Brian Powell

"This very interesting, informative, and well-written book presents many fascinating interviews, and provides a window on one of the most contested subjects in the U.S. today. Essential."

"Queering Marriage is a careful, fair, and compelling analysis of how same-sex couples navigate the multiple and often conflicting meanings of marriage; impressive, tidy, and accessible, it will also appeal to an audience unfamiliar with sociology."
— Jaye Cee Whitehead

"A smart, sensitive account of what marriage meant to, and did for, San Francisco’s 'Winter of Love' participants, Queering Marriage demonstrates how same-sex marriages subvert heteronormativity even as they shore it up."
— Joshua Gamson

"Queering Marriage contributes to the gay marriage debate by showcasing the power of empirical research to offer answers to assimilation versus social change arguments. An incisive story about the power of heteronormativity to validate or invalidate, legitimate or delegitimize, samesex relationships."
— Gender and Society

"Queering Marriage provides a compelling look into experiences of same-sex couples who married during San Francisco’s Winter of Love. Kimport skillfully weaves history, theory, and lived experiences to present a thoughtful analysis that attends to the complexities of same-sex marriage as both a social and political issue. It is a recommended read for anyone interested in the politics of same-sex marriage activism and practice in the United States."
— Journal of Homosexuality

"Queering Marriage shares stories about the impact of marriage on men and women who, though often cognizant of the transitory legality of their marriages, testified to the ways that it changed their lives. Kimport masterfully analyzes the meanings of marriage to these women and men as a way to gauge its transformative potential."
— American Journal of Sociology

"This well-written and thoughtful book provides a unique window into the experiences of same-sex Americans married in this remarkable moment. The joy and love the participants felt at the time is palpable in Kimport’s quotes, and she does a masterful job of weaving in descriptors of the respondents and their experiences and opinions into her analysis."
— Social Forces

"Kimport's book provides a valuable record of the on-the-ground persepctives of participants in an iconic historical moment."
— Mobilization