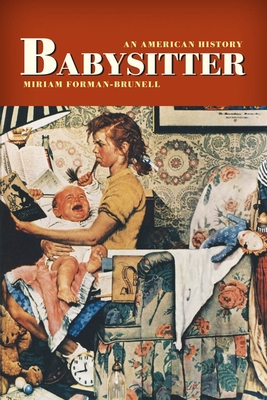 By Miriam Forman-Brunell
$30.80
NOT CURRENTLY IN THE STORE - Available to Order - Usually Arrives in Store in 1-5 Business Days!

On Friday nights many parents want to have a little fun together--without the kids. But "getting a sitter"--especially a dependable one--rarely seems trouble-free. Will the kids be safe with "that girl"? It's a question that discomfited parents have been asking ever since the emergence of the modern American teenage girl nearly a century ago. In Babysitter, Miriam Forman-Brunell brings critical attention to the ubiquitous, yet long-overlooked babysitter in the popular imagination and American history.

Informed by her research on the history of teenage girls' culture, Forman-Brunell analyzes the babysitter, who has embodied adults' fundamental apprehensions about girls' pursuit of autonomy and empowerment. In fact, the grievances go both ways, as girls have been distressed by unsatisfactory working conditions. In her quest to gain a fuller picture of this largely unexamined cultural phenomenon, Forman-Brunell analyzes a wealth of diverse sources, such as The Baby-sitter's Club book series, horror movies like The Hand That Rocks the Cradle, urban legends, magazines, newspapers, television shows, pornography, and more.

Forman-Brunell shows that beyond the mundane, understandable apprehensions stirred by hiring a caretaker to "mind the children" in one's own home, babysitters became lightning rods for society's larger fears about gender and generational change. In the end, experts' efforts to tame teenage girls with training courses, handbooks, and other texts failed to prevent generations from turning their backs on babysitting.

Miriam Forman-Brunell is Professor of History at the University of Missouri, Kansas City. She is the author of "Made to Play House and" general editor of ABC-CLIO's "Girlhood in America." She is also co-director of Children and Youth in History.