Chart Interpretation Handbook: Guidelines for Understanding the Essentials of the Birth Chart (Paperback) 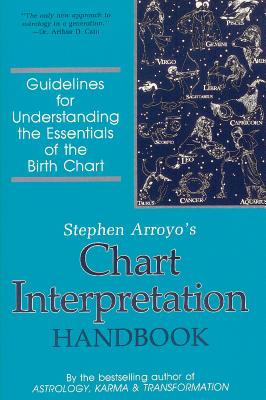 By Stephen Arroyo
$14.95
NOT CURRENTLY IN THE STORE - Available to Order - Usually Arrives in Store in 1-5 Business Days!

Thousands of readers worldwide have found personal meaning in Arroyo's bestselling books, which are widely used by students, practitioners, and teachers searching for a method that reveals the essential truths of their lives that they can immediately identify with. Here, he shows how to develop reliable, in-depth interpretations for any birth chart, utilizing a precise, modern language. STEPHEN ARROYO's eight books have made him one of the best-selling authors of modern astrology books worldwide. Among his works are Astrology, Psychology & the Four Elements; Astrology, Karma & Transformation; Relationships and Life Cycles; Stephen Arroyo's Chart Interpretation Handbook, & Exploring Jupiter. His writings have elicited such tremendously enthusiastic response internationally that they have now been translated into 20 languages, and he has been awarded the British Astrological Association Astrology Prize, the Fraternity of Canadian Astrologers' International Sun Award, and United Astrology Congress's Regulus Award. Arroyo's work spans the spectrum of modern, psychologically oriented astrology, supported by his many years of one-to-one counseling work (he holds a California Marriage, Family & Child Counseling license), and body- and energy-centered therapies such as Polarity Therapy. With a background in mathematics and the arts (an honors degree in literature from University of California), and a master's degree in psychology, Stephen Arroyo has developed a system in which the individual's experience is foremost, disregarding the fatalism and negativity of old-fashioned astrology. His writings are renowned for the reliable methods he has distilled for understanding astrological principles in relation to the human energy field, in a way that people of all cultures and backgrounds can easily relate to. As Library Journal stated, his work is particularly notable for his unique ability to express complex concepts in clear, simple language that the reader can identify with and apply in his or her own life. In addition to numerous appearances in the USA, Arroyo has been a guest speaker or seminar leader in the UK, Spain, France, Italy, Mexico, and Switzerland. He has taught some of the first college courses on astrology in the USA, at four different schools.