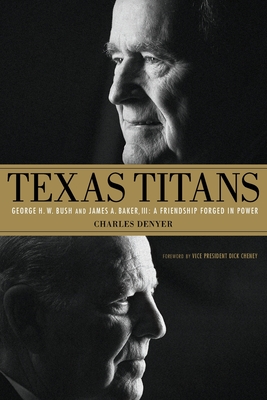 By Charles Denyer
$24.99
NOT CURRENTLY IN THE STORE - Available to Order - Usually Arrives in Store in 1-5 Business Days!

A Personal and Political Friendship for the Ages

The friendship between George H.W. Bush and James A. Baker, III began over fifty years ago on the tennis courts of the Houston Country Club when they found themselves paired as a doubles team, winning back-to-back championships in 1966 and 1967. While both men were admittedly weak servers, Bush was the net-and-volley guy, with Baker holding down the baseline with his groundstroke skills. That same approach of complementary skill sets and teamwork spilled over into their political careers for decades to come.

Both men's r sum's were legendary. Bush served as a United States congressman, ambassador to the United Nations, chair of the Republican National Committee, US liaison to China, director of Central Intelligence, 43rd vice president, and 41st president of the United States.

Baker served as undersecretary of commerce, secretary of the treasury, secretary of state, and White House chief of staff -- twice, while also chairing or playing a lead role in five successive presidential elections for three different candidates from 1976 to 1992.

Texas Titans is a story of George Herbert Walker Bush and James Addison Baker, III, two of America's most consequential statesmen of the past fifty years. Two men from opposite areas of the country who found friendship on the tennis courts at the Houston Country Club. Two men who helped transform a world during an era of immense challenges and change. Two men who became -- and still are -- Texas titans.

A sea of change engulfed the world during Bush's single term as president, testing his resolve like never before as a series of cascading events unfolded. The Berlin Wall -- a symbol of human oppression -- was torn down after thirty years. Saddam Hussein invaded tiny neighboring Kuwait, throwing the Middle East into turmoil and panic. Mikhail Gorbachev, the leader of the Soviet Union, was placed under house arrest in an attempted coup. And the Soviet Union ceased to exist on December 26, 1991. Events no historian or political operative could have accurately predicted, nevertheless, moments in history that placed George Herbert Walker Bush and James Addison Baker, III front and center on the world stage.

On the 1992 Presidential Election:

Baker admits that the loss "was devastating. He George H.W. Bush] was devastated by that loss." Baker is also quick to point out that "I read a lot . . . comments, pundits and so forth saying, he lost because he broke his no-new-taxes pledge. That's not why he lost. . . . Everybody ought to get that straight. I ran that campaign, and I saw it every day in the polling. He lost because of a little guy from Dallas, Texas, called Ross Perot, who took nineteen percent of the vote. And we knew from our polling he Perot] was taking two out of every three votes from us. We got 38, Clinton got 43. You add two-thirds of 19 to 38, and we get 51."

"I have always been proud that George Bush used to describe our relationship as one of big brother and little brother. He used to say that one of the things he liked best about me was that I would always tell him what I thought, even when I knew he didn't want to hear it. Then we would have a spirited discussion about that issue."

"But he had a very effective way of letting me know when the discussion was over," he continued. "He would look at me and say, 'Baker, if you're so smart, why am I president and you're not?'"