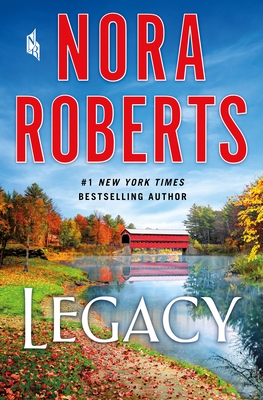 #1 New York Times bestselling author Nora Roberts presents Legacy, a new novel of a mother and a daughter, of ambition and romance, and of a traumatic past reawakened by a terrifying threat…

Adrian Rizzo was seven when she met her father for the first time. That was the day he nearly killed her—before her mother, Lina, stepped in.

Soon after, Adrian was dropped off at her grandparents’ house in Maryland, where she spent a long summer drinking lemonade, playing with dogs, making a new best friend—and developing the stirrings of a crush on her friend’s ten-year-old brother. Lina, meanwhile, traveled the country promoting her fitness brand and turning it into a billion-dollar business. There was no point in dwelling on the past.

A decade later, Adrian has created her own line of yoga and workout videos, following in Lina’s footsteps but intent on maintaining creative control. And she’s just as cool-headed and ambitious as her mother. They aren’t close, but they’re cordial—as long as neither crosses the other.

But while Lina dismisses the death threats that Adrian starts getting as a routine part of her daughter’s growing celebrity, Adrian can’t help but find the vicious rhymes unsettling. Year after year, they keep arriving—the postmarks changing, but the menacing tone the same. They continue after she returns to Maryland and becomes reacquainted with Raylan, her childhood crush, all grown up and as gorgeously green-eyed as ever. Sometimes it even seems like the terrifying messages are indeed routine, like nothing will come of them. Until the murders start, and the escalation begins…

NORA ROBERTS is the #1 New York Times bestselling author of more than 230 novels, including Legacy, The Awakening, Hideaway, Under Currents, The Chronicles of The One trilogy, and many more. She is also the author of the bestselling In Death series written under the pen name J.D. Robb. There are more than 500 million copies of her books in print.

Roberts’ strength has always been her ability to create likable, complex characters, and this crew is even more appealing than most—they are never whiny in insecurity or snobbish in success; rather, they provide unwavering support for each other’s ups and downs. The most comforting of comfort-food reading—with a few chills for fun." —Kirkus

"If anyone can take a sweet romance that seems destined for a normal happily-ever-after and twist in a breath-stealing threat while feeding her readers the perfect way to thwart the bad guys, it's the incomparable Nora Roberts. And she does just this in Legacy...it will hold you completely spellbound!" —Fresh Fiction

“One of my favorite Nora Roberts’ books of late…highly recommended...this book is perfect for summer reading!” —Fort Hood Sentinel

“Roberts’ impeccable timing, delivery, and crescendo still manages to deliver that uneasy response that makes this story what it is, the subtle building thriller with that evil lurking just behind the scenes.” —Mystery & Suspense Magazine