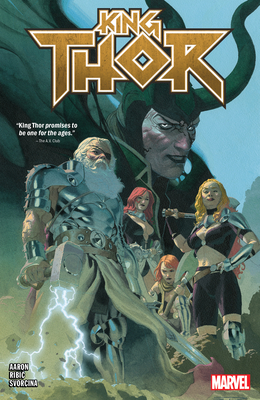 Superstars Jason Aaron & Esad Ribic conclude their epic Thor story! The creators of the legendary THOR: GOD OF THUNDER series that kicked off one of the most epic runs in Marvel his-tory are back together for one last ride with the almighty Lord of Asgard! Seven years ago, Jason and Esad introduced the Thor of the far future, All-Father of a broken realm and a dying uni-verse, as he stood in battle against the Butcher of Gods, wielder of All-Black the Necrosword. Now that nefarious blade has returned, in the hands of Thor's all time greatest enemy - his brother, Loki - for one final, cataclysmic showdown. Behold the book no comics fan should miss - the celebration of the end of a truly marvelous era.

Writer Jason Aaron's early collaboration with artist Cameron Stewart on DC Vertigo's The Other Side was named one of the Washington Post's "Best Comics of 2007." His next project, Scalped, garnered industry-wide praise and led to a guest spot on WOLVERINE, beginning Aaron's long association with Logan on various titles, as well as the rest of Marvel's merry mutants, on books including X-MEN: SCHISM, WOLVERINE & THE X-MEN and AMAZING X-MEN. Aaron rocked the Marvel Universe with ORIGINAL SIN and has unfolded a status quo-shattering Asgardian epic across multiple THOR titles. He was the ideal choice to steer the rebel crew of STAR WARS into new adventures on the series' return to Marvel, and he ushered in a brand new era for the publisher with MARVEL LEGACY. In the wake of that one-shot, he took on Earth's Mightiest Heroes in AVENGERS and has welcomed another iconic property back to the House of Ideas with CONAN THE BARBARIAN.