Amusing Ourselves to Death: Public Discourse in the Age of Show Business (Compact Disc) 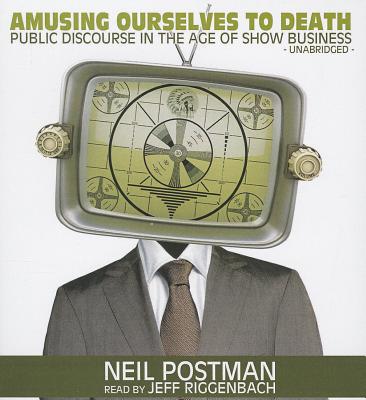 Despite being written in 1985, Amusing Ourselves to Death might be the most important book you could read about political discourse in the twenty-first century. When entertainment is everything the rise of Trump doesn't seem shocking...it seems inevitable.

In this eloquent and persuasive book, Neil Postman examines the deep and broad effects of television culture on the manner in which we conduct our public affairs, and how "entertainment values" have corrupted the very way we think. As politics, news, religion, education, and commerce are given less and less expression in the form of the printed word, they are rapidly being reshaped to suit the requirements of television. And because television is a visual medium, whose images are most pleasurably apprehended when they are fast-moving and dynamic, discourse on television has little tolerance for argument, hypothesis, or explanation. Postman argues that public discourse--the advancing of arguments in logical order for the public good, once a hallmark of American culture--is being converted from exposition and explanation to entertainment.