You Should Have Known (CD-Audio) 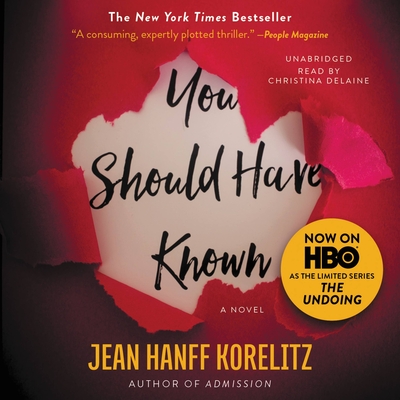 An opportunity to see a talented writer truly come into her own. The characters are fully formed and there's more than enough suspense to keep you going!

Grace Reinhart Sachs is living the only life she ever wanted for herself. Devoted to her husband, a pediatric oncologist at a major cancer hospital, their young son Henry, and the patients she sees in her therapy practice, her days are full of familiar things: she lives in the very New York apartment in which she was raised, and sends Henry to the school she herself once attended.

Dismayed by the ways in which women delude themselves, Grace is also the author of a book You Should Have Known, in which she cautions women to really hear what men are trying to tell them. But weeks before the book is published a chasm opens in her own life: a violent death, a missing husband, and, in the place of a man Grace thought she knew, only an ongoing chain of terrible revelations. Left behind in the wake of a spreading and very public disaster, and horrified by the ways in which she has failed to heed her own advice, Grace must dismantle one life and create another for her child and herself.

Jean Hanff Korelitz was born and raised in New York and graduated from Dartmouth College and Clare College, Cambridge. She is the author of one book of poems, The Properties of Breath, and three previous novels, A Jury of Her Peers, The Sabbathday River, The Devil and Webster, and The White Rose, as well as a novel for children, Interference Powder. She has also published essays in the anthologies Modern Love and Because I Said So, and in the magazines Vogue, Real Simple, More, Newsweek, Organic Style, Travel and Leisure (Family), and others. She lives in Princeton, NJ with her husband (Irish poet Paul Muldoon, poetry editor at the New Yorker and Princeton poetry professor) and two children.