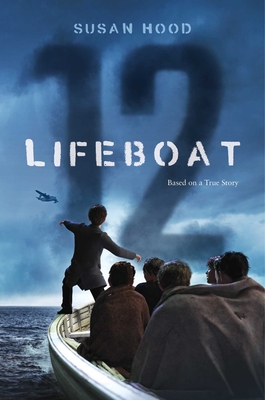 By Susan Hood
$8.99
NOT CURRENTLY IN THE STORE - Available to Order - Usually Arrives in Store in 1-5 Business Days!

In the tradition of The War That Saved My Life and Stella By Starlight, this poignant novel in verse based on true events tells the story of a boy’s harrowing experience on a lifeboat after surviving a torpedo attack during World War II.

With Nazis bombing London every night, it’s time for thirteen-year-old Ken to escape. He suspects his stepmother is glad to see him go, but his dad says he’s one of the lucky ones—one of ninety boys and girls to ship out aboard the SS City of Benares to safety in Canada.

Life aboard the luxury ship is grand—nine-course meals, new friends, and a life far from the bombs, rations, and his stepmum’s glare. And after five days at sea, the ship’s officers announce that they’re out of danger.

Late that night, an explosion hurls Ken from his bunk. They’ve been hit. Torpedoed! The Benares is sinking fast. Terrified, Ken scrambles aboard Lifeboat 12 with five other boys. Will they get away? Will they survive?

Award-winning author Susan Hood brings this little-known World War II story to life in a riveting novel of courage, hope, and compassion. Based on true events and real people, Lifeboat 12 is about believing in one another, knowing that only by banding together will we have any chance to survive.

Susan Hood has written more than 200 picture books. She has received starred reviews in Publishers Weekly and Booklist, and her book Spike, The Mixed-Up Monster won the 2013 International Latino Award and was selected for the Charlotte Zolotow Highly Commended List. The Tooth Mouse was named a 2013 Best Book of the Year by Bank Street and the Cooperative Children’s Book Center. Prior to becoming an author, Susan was a children’s magazine editor at Scholastic and Instructor Magazine, a book editor at Sesame Workshop, and the Children’s Content Director of Nick Jr. Magazine. Ada’s Violin is her latest nonfiction picture book and Lifeboat 12 is her first novel in verse. Visit her at SusanHoodBooks.com/Home.

"This page-turning true-life adventure is filled with rich and riveting details and a timeless understanding of the things that matter most.”
— Dashka Slater, author of The 57 Bus

* "This stirring novel-in-verse based on a true story is an edge-of-your-seat survival tale, an extensively researched work of historical fiction, and an exemplar of the form."
— School Library Journal, STARRED REVIEW

"Told in verse, the story of LIFEBOAT 12 is lyrical, terrifying, and even at times funny. A richly detailed account of a little-known event in World War II."
— Kirkus Reviews

“A captivating tale of the triumph of the human spirit. I felt transported to the open ocean, and cold to my bones!”
— Leslie Connor, author of THE TRUTH AS TOLD BY MASON BUTTLE