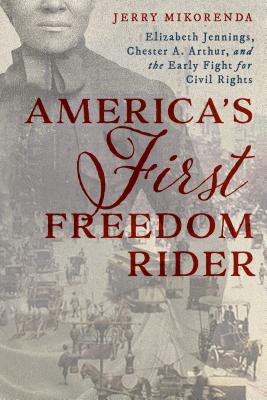 By Jerry Mikorenda
$24.95
NOT CURRENTLY IN THE STORE - Hard to Find - We Will Research Availability and Get Back to You

In 1854, traveling was full of danger. Omnibus accidents were commonplace. Pedestrians were regularly attacked by the Five Points' gangs. Rival police forces watched and argued over who should help. Pickpockets, drunks and kidnappers were all part of the daily street scene in old New York. Yet somehow, they endured and transformed a trading post into the Empire City. None of this was on Elizabeth Jennings's mind as she climbed the platform onto the Chatham Street horsecar. But her destination and that of the country took a sudden turn when the conductor told her to wait for the next car because it had "her people" in it. When she refused to step off the bus, she was assaulted by the conductor who was aided by a NY police officer. On February 22, 1855, Elizabeth Jennings v. Third Avenue Rail Road case was settled. Seeking $500 in damages, the jury stunned the courtroom with a $250 verdict in Lizzie's favor. Future US president Chester A. Arthur was Jennings attorney and their lives would be forever onward intertwined. This is the story of what happened that day. It's also the story of Jennings and Arthur's families, the struggle for equality, and race relations. It's the history of America at its most despicable and most exhilarating. Yet few historians know of Elizabeth Jennings or the impact she had on desegregating public transit.

Jerry Mikorenda's articles and op-eds have appeared in The New York Times, Newsday, The Boston Herald, San Francisco Chronicle, and Wall Street Journal as well as various other magazines. He is also a graduate of the prestigious Master's Program at Syracuse University's S.I. Newhouse School. A member of SCBWI and BIO (Biographers International Organization), his history profiles are included in the 2010 Encyclopedia of New York City and on the Gotham Center's History Blog. In 2015, the popular American Heroes Channel (AHC) program, What History Forgot interviewed the author for a segment about Elizabeth Jennings. He lives in Northport, NY.