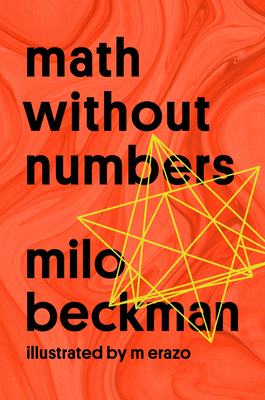 An illustrated tour of the structures and patterns we call "math"

The only numbers in this book are the page numbers.

Math Without Numbers is a vivid, conversational, and wholly original guide to the three main branches of abstract math—topology, analysis, and algebra—which turn out to be surprisingly easy to grasp. This book upends the conventional approach to math, inviting you to think creatively about shape and dimension, the infinite and infinitesimal, symmetries, proofs, and how these concepts all fit together. What awaits readers is a freewheeling tour of the inimitable joys and unsolved mysteries of this curiously powerful subject.

Like the classic math allegory Flatland, first published over a century ago, or Douglas Hofstadter's Godel, Escher, Bach forty years ago, there has never been a math book quite like Math Without Numbers. So many popularizations of math have dwelt on numbers like pi or zero or infinity. This book goes well beyond to questions such as: How many shapes are there? Is anything bigger than infinity? And is math even true? Milo Beckman shows why math is mostly just pattern recognition and how it keeps on surprising us with unexpected, useful connections to the real world.

The ambitions of this book take a special kind of author. An inventive, original thinker pursuing his calling with jubilant passion. A prodigy. Milo Beckman completed the graduate-level course sequence in mathematics at age sixteen, when he was a sophomore at Harvard; while writing this book, he was studying the philosophical foundations of physics at Columbia under Brian Greene, among others.

Milo Beckman has been addicted to math since a young age. Born in Manhattan in 1995, he began taking math classes at Stuyvesant High School at age eight and was captain of the New York City Math Team by age thirteen. His diverse projects and independent research have been featured in the New York Times, FiveThirtyEight, Good Morning America, Salon, the Huffington Post, the Chronicle of Higher Education, Business Insider, the Boston Globe, Gothamist, the Economist, and others. He worked for three tech companies, two banks, and a US senator before retiring at age nineteen to teach math in New York, China, and Brazil, and to work on this book.

“With charm, unwavering enthusiasm, and a lot of cartoons, Math Without Numbers waltzes the reader through a garden of higher mathematics.”
—Jordan Ellenberg, professor of mathematics, University of Wisconsin-Madison, author of How Not To Be Wrong

"So delightful! Mathematics is playful, surprising, and enchanting, but those qualities are often obscured behind intimidating equations and formalism. Milo Beckman brings them out into the open for everyone to share."
—Sean Carroll, author of Something Deeply Hidden: Quantum Worlds and the Emergence of Spacetime

“The book’s accessible language and illustrations makes understanding some of the most complex (and possibly most intimidating) math concepts feel as effortless as breathing. Beckman’s approachable writing and Erazo’s delightful illustration combine to tell an insightful and entertaining story about math.”
—Giorgia Lupi and Stefanie Posavec, co-authors of Dear Data and Observe, Collect, Draw!

“This is the book for you if you’ve ever been curious about the wonderful ideas and concepts underlying modern math, but been too frightened to make a start. Milo Beckman gives us a friendly introduction to unfamiliar concepts and ideas that show why modern math is such a fascinating and rewarding branch of human thought.”
—Graham Farmelo, author of The Universe Speaks in Numbers

“Math Without Numbers offers an accessible and whimsically illustrated glimpse of what pure mathematicians study, all while capturing the playful spirit with which they do it.”
—Grant Sanderson, creator of 3blue1brown

“A playful paean to the pleasures of studying higher math…Readers with an abundance of curiosity and the time to puzzle over Beckman’s many examples, riddles, and questions, will make many fascinating discoveries.”
—Publishers Weekly

"A pleasant, amusing look at mathematics as a description of everything."
—Kirkus