Our Stories, Our Voices: 21 YA Authors Get Real About Injustice, Empowerment, and Growing Up Female in America (Paperback) 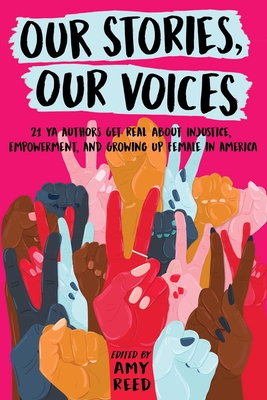 From Amy Reed, Ellen Hopkins, Amber Smith, Nina LaCour, Sandhya Menon, and more of your favorite YA authors comes an “outstanding anthology” (School Library Connection) of essays that explore the diverse experiences of injustice, empowerment, and growing up female in America.

This collection of twenty-one essays from major YA authors—including award-winning and bestselling writers—touches on a powerful range of topics related to growing up female in today’s America, and the intersection with race, religion, and ethnicity. Sure to inspire hope and solidarity to anyone who reads it, Our Stories, Our Voices belongs on every young woman’s shelf.

Amy Reed is the author of the contemporary young adult novels Beautiful, Clean, Crazy, Over You, Damaged, Invincible, Unforgivable, The Nowhere Girls, and The Boy and Girl Who Broke the World. She is also the editor of Our Stories, Our Voices. She is a feminist, mother, and quadruple Virgo who enjoys running, making lists, and wandering around the mountains of western North Carolina where she lives. You can find her online at AmyReedFiction.com.

Amy Reed is the author of the contemporary young adult novels Beautiful, Clean, Crazy, Over You, Damaged, Invincible, Unforgivable, The Nowhere Girls, and The Boy and Girl Who Broke the World. She is also the editor of Our Stories, Our Voices. She is a feminist, mother, and quadruple Virgo who enjoys running, making lists, and wandering around the mountains of western North Carolina where she lives. You can find her online at AmyReedFiction.com.

Sandhya Menon is the New York Times bestselling author of When Dimple Met Rishi, Of Curses and Kisses, and many other novels that also feature lots of kissing, girl power, and swoony boys. Her books have been included in several cool places, including the Today show, Teen Vogue, NPR, BuzzFeed, and Seventeen. A full-time dog servant and part-time writer, she makes her home in the foggy mountains of Colorado. Visit her online at SandhyaMenon.com.

Ellen Hopkins is the #1 New York Times bestselling author of numerous young adult novels, as well as the adult novels such as Triangles, Collateral, and Love Lies Beneath. She lives with her family in Carson City, Nevada, where she has founded Ventana Sierra, a nonprofit youth housing and resource initiative. Follow her on Twitter at @EllenHopkinsLit.

Amber Smith is the New York Times bestselling author of the young adult novels The Way I Used to Be and The Last to Let Go. An advocate for increased awareness of gendered violence, as well as LGBTQ equality, she writes in the hope that her books can help to foster change and spark dialogue surrounding these issues. She grew up in Buffalo, New York, and now lives in Charlotte, North Carolina, with her partner and their ever-growing family of rescued dogs and cats. You can find her online at AmberSmithAuthor.com.

Stephanie Kuehnert got her start writing bad poetry about unrequited love and razor blades in eighth grade. In high school, she discovered punk rock and produced several D.I.Y. feminist zines. She received her MFA in creative writing from Columbia College Chicago and lives in Seattle, Washington. She is the author of Ballads of Surburbia and I Wanna Be Your Joey Ramone. Learn more at StephanieKuehnert.com.

Aisha Saeed is the author of Written in the Stars, which was listed as a best book of 2015 by Bank Street Books, a 2016 YALSA Quick Pick For Reluctant Readers, and named one of the top ten books all Young Georgians Should Read in 2016. She is also the author of the middle grade novel Amal Unbound, which has received starred reviews from Publishers Weekly and Kirkus Reviews  and is a Global Read Aloud for 2018. She is also the author of the picture book Bilal Cooks Daal. Aisha is also a founding member of the nonprofit We Need Diverse Books. She has been featured on MTV, Huffington Post, NBC, and the BBC, and her writings have appeared in publications including the journal ALAN and the Orlando Sentinel.

Tracy Deonn is the New York Times bestselling and Coretta Scott King - John Steptoe Award winning author of Legendborn, and a second-generation fangirl. She grew up in central North Carolina, where she devoured fantasy books and Southern food in equal measure. After earning her bachelor’s and master’s degrees in communication and performance studies from the University of North Carolina at Chapel Hill, Tracy worked in live theater, video game production, and K–12 education. When she’s not writing, Tracy speaks on panels at science fiction and fantasy conventions, reads fanfic, arranges puppy playdates, and keeps an eye out for ginger-flavored everything. She can be found on Twitter at @TracyDeonn and at TracyDeonn.com.

Gr 9 Up–Twenty-one YA authors—including such well-known figures as Ellen Hopkins, Maurene Goo, and Printz award-winner Nina LaCour, as well as two unpublished authors selected from a call for submissions—reflect on their early lives and what it means to be a woman in the United States. Many of these writers experienced marginalization as younger girls based on race, immigration status, sexuality, or simply not fitting in. Each turned to writing as solace, an outlet, or a way of speaking out against injustice. The stories are all unique, some focusing on the subject’s childhood, others on their lives as adults. Many discuss their anger at the recent presidential election and put out an inspiring call to action. The authors speak directly to readers in an informal tone; the essays are written in the first person with some casual profanity. A content warning in the editor’s note mentions that the entries discuss race-based and sexual violence. A resource list includes websites of activist organizations, in addition to information on how to participate in the political system. VERDICT Many readers will see themselves reflected in the pages of this collection and be inspired by the first-hand accounts of overcoming adversity. A great pick for budding writers and activists.–Clara Hendricks, Cambridge Public Library, MA
— School Library Journal STARRED REVIEW

"Threaded through these essays is the power of art and creativity in tackling the task that lies ahead: forging a better, more just world for future generations. Truthful and empowering."
— Booklist

"Oustanding anthology . . . A clarion call to activism, the book empowers girls growing up with injustice in America by reflecting authentic and original voices from across the spectrums of race, gender, and religion and encourages them to speak their truths and become warriors for social justice."