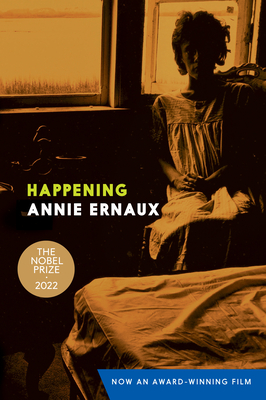 WINNER OF THE 2022 NOBEL PRIZE IN LITERATURE

"Happening recounts what it was like to be a young woman whose life changed — and world ominously narrowed — in 1963 with an unwanted pregnancy. . . . It feels urgently of the moment."
--The New York Times

In 1963, Annie Ernaux, 23 and unattached, realizes she is pregnant. Shame arises in her like a plague: Understanding that her pregnancy will mark her and her family as social failures, she knows she cannot keep that child.

This is the story, written forty years later, of a trauma Ernaux never overcame. In a France where abortion was illegal, she attempted, in vain, to self-administer the abortion with a knitting needle. Fearful and desperate, she finally located an abortionist, and ends up in a hospital emergency ward where she nearly dies.

In Happening, Ernaux sifts through her memories and her journal entries dating from those days. Clearly, cleanly, she gleans the meanings of her experience.

Born in 1940, ANNIE ERNAUX grew up in Normandy, studied at Rouen University, and later taught high school. From 1977 to 2000, she was a professor at the Centre National d’Enseignement par Correspondance. Her books, in particular A Man’s Place and A Woman’s Story, have become contemporary classics in France. Ernaux won the prestigious Prix Renaudot for A Man's Placewhen it was first published in French in 1984, and the English edition became a New York Times Notable Book. Other New York Times Notable Books include Simple Passion and A Woman's Story, which was also a Los Angeles Times Book Prize Finalist.

Ernaux’s most recent work, The Years, has received the Françoise-Mauriac Prize of the French Academy, the Marguerite Duras Prize, the Strega European Prize, the French Language Prize, and the Télégramme Readers Prize. The English edition, translated by Alison L. Strayer, won the 31st Annual French-American Translation Prize for non-fiction and is shortlisted for the 2019 Man Booker International Prize. Her new book, Portrait of the Artist as a Young Woman, will be out from Seven Stories in 2020.

“With the dispassion and efficiency of a military strategist, [Ernaux] ambushes her past, prying it from its refuge in nostalgia and oblivion and holding it up naked for all to see . . . a harrowing account . . . superbly translated.” —Emily Eakin, The New York Times Book Review

“Ernaux. . .writes with clear, controlled precision that is as vivid as it is devastating to read, and which connects the pain and indignity of her experience to class, power and patriarchy.” —The Guardian

“Although the events Ernaux describes so explicitly occurred more than 50 years ago, they retain their horrifying immediacy, and should act as a reminder that her lack of options is the reality for many women worldwide, with access to legal abortion severely restricted or denied. Universal, primeval and courageous, Happening is a fiercely dislocating, profoundly relevant work—as much of art as of human experience. It should be compulsory reading.” —Financial Times

“Happening is gripping and painfully inevitable to read—like a thriller. I felt close to Annie Duchesne, in her aloneness, in a way I’ve rarely felt close to a character in a book. Women will be grateful to Ernaux for her wisdom, concision, and commitment to writing about death and life.” —Daisy Hildyard, author of The Second Body

“Ernaux connects her experience to the wider world of class and religion and law, resulting in a startling, unusual portrait...” —The Village Voice

“…the book administers a punch beyond its slim size ... It is unflinching and honest, a frank patchwork of past and present experiences. … The title suits the subject: illegal abortion isn’t confined to history, suspended in aspic, a thing to be examined in the past tense. It is still hotly contested, demanding the present participle of Ernaux’s title.  … an essential document of trauma which deserves to be widely read.” —Xenobe Purvis, Review 31

“This short book … is one of the most powerful memoirs I have ever read. Ernaux is famed in France, and is gathering fame abroad ... as an autobiographer of unusual talent and insight, virtually creating (although she disavows the term) a genre called “autofiction”, a hybrid style mixing, as the name suggests, autobiography and fiction, although there is nothing in Happening that suggests any fictional element. This is the truth, as bare as it can be told, although every so often Ernaux reminds us, carefully, that memory is slippery.” —Nicholas Lezard, Dhaka Tribune

“The writer’s ego is downplayed; there is no excavating of sensibility, it is more an exercise in the excavation of personal history, undertaken for the author’s own purposes. Her approach is investigative, almost academic, with the reader an accidental presence. The result for the reader is a feeling of intimate emotional, intellectual and sociological knowledge of the author’s pregnancy and abortion. The writing is sublime and unforgettable. Happening is one of the most remarkable books you will ever read.” —Dublin Review of Books