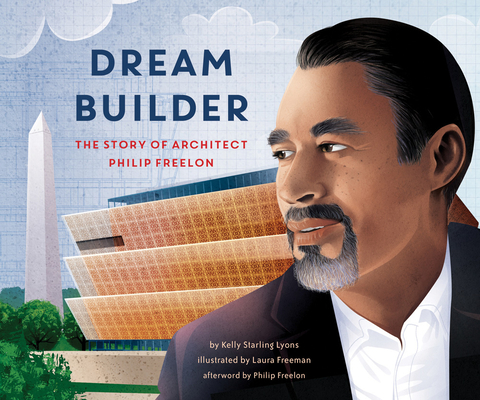 You've seen the building. Now meet the man whose life went into it.

Philip Freelon's grandfather was an acclaimed painter of the Harlem Renaissance. His father was a successful businessman who attended the 1963 March on Washington. When Phil decided to attend architecture school, he created his own focus on African American and Islamic designers. He later chose not to build casinos or prisons, instead concentrating on schools, libraries, and museums--buildings that connect people with heritage and fill hearts with joy. And in 2009, Phil's team won a commission that let him use his personal history in service to the country's: the extraordinary Smithsonian National Museum of African American History and Culture.

Dream Builder: The Story of Architect Philip Freelon celebrates a contemporary black STEAM role model, a man whose quiet work enabled the creation of an iconic building reflecting America's past and future. With a stirring text by Kelly Starling Lyons, vibrant pictures by Laura Freeman, and an afterword from Philip Freelon himself, it is sure to inspire the next generation of dreamers and builders.

Kelly Starling Lyons is the author of multiple award-winning picture books and chapter books, most recently Sing a Song: How Lift Every Voice and Sing Inspired Generations, illustrated by Keith Mallett, and the Jada Jones series, illustrated by Vanessa Brantley Newton. Like Philip Freelon, Kelly grew up in Pennsylvania in a family that prized creativity, and now lives in North Carolina with a family of her own. Please visit her website at kellystarlinglyons.com and follow her on Twitter at @kelstarly. Laura Freeman has illustrated more than thirty picture books, including the picture-book edition of Hidden Figures by Margot Lee Shetterly, which won both the NAACP Image Award and a Coretta Scott King Illustrator Honor Award, and Jazz Baby and Bedtime Fun, both published by Lee & Low's Bebop Books imprint. Laura lives near Atlanta, Georgia, and you can find her on the web at lfreemanart.com.