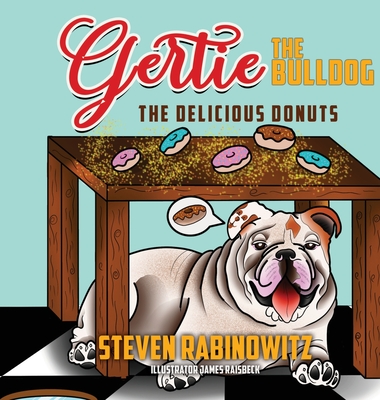 By Steven Rabinowitz
$18.67
NOT CURRENTLY IN THE STORE - Available to Order - Usually Arrives in Store in 1-5 Business Days!

It's party day and this Sassy old Bulldog only attends parties for the food. Is there really any other reason?

It's no secret to her fans that Sprinkled Donuts are without question her favorite. Gertie's friend Spot, who forms the shape of a dog's face on her ear, just let Gertie know that there is a big, beautiful plate of Sprinkled Donuts outside.

Follow Gertie and Spot on a fun filled adventure in their desire to sink their teeth into one of these sweet treats.

Can they escape the house without being caught? Do they reach the table with Delicious Donuts outside? There is only one simple way to find out. Put this book in your cart and check it out...

Steven Rabinowitz wrote the book "Gertie the Bulldog, The Delicious Donuts" in honor and remembrance of his beloved English Bulldog, Gertie. He manages a Facebook and Twitter account for "Gertie The Bulldog" with a combined following of over 25,000 fans. He posts Gertie's daily thoughts sharing her secrets on health, beauty, nutrition, and what life is like to be the Queen of All Bulldogs.

His wife Gloria was Gertie's daily caretaker. There was nothing she did not do for this pampered pooch. She did all of this out of love for Gertie. Gloria was also the "puppa-razzi". She snapped all the photos found on Gertie's social media, and there are literally thousands of them for your viewing pleasure.

Gertie the Bulldog...all who met her knew this Bulldog certainly had "Swag". She was affectionately known in her circle as The Queen of All Bulldogs. If Gertie could talk, she would get everything she asked for. She didn't ask for much, except that her bowl of food never go empty. And of course, every day she asked for her favorite snack...Sprinkled Donuts