A Dream For Every Season (Hardcover) 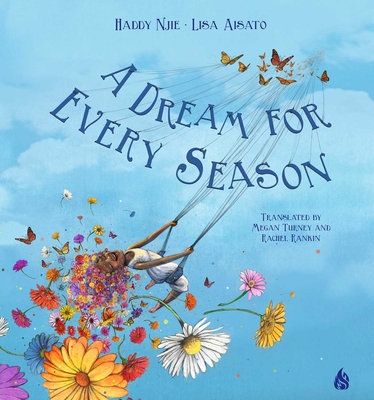 From the excitement of a first snowfall to spring flowers blooming to the magic of summer’s warm winds, A Dream for Every Season will have children dreaming of the natural world in this beautiful bedtime book.

The beauty of each season of the year…the change each season brings…the passage of time and its special charm come to life in poetic rhyme, accompanied by gorgeous illustrations in this bedtime book.

Haddy Njie is an artist, a columnist, singer, writer, composer, and one of Norway’s most known and beloved TV presenters on The Norwegian Broadcasting Corporation. She writes as a freelancer for a number of newspapers and magazines.

Lisa Aisato is Norway's most popular and well-known illustrator. She has written six books of her own and illustrated the books of many well-known authors. Her book Odd Is An Egg was adapted into an animated short and won the Jury Prize at the 2017 Tribeca Film Festival. Her books have been translated into more than 20 languages.

Megan Turney is originally from the West Midlands, and after spending several years moving back and forth between the UK and the Hardanger region of Norway, she is now based in Edinburgh, Scotland. Megan holds an MA(Hons) in Scandinavian Studies and English Literature from the University of Edinburgh and an MA in Translation and Interpreting Studies from the University of Manchester, but has experience working in a variety of industries, from pharmacy, farming and childcare to publishing, science fiction book reviewing, and the library services. In 2019, she was selected for the National Centre for Writing’s Emerging Translator Mentorship Programme and spent six months being mentored by Norwegian translator Kari Dickson. She now works full-time as a commercial and literary translator and editor, working from both Bokmål and Nynorsk into English. More information about her current projects and published works can be found on: www.meganeturney.com

Rachel received a Scottish Book Trust New Writers Award in 2019, a Dewar Arts Award in 2017, and was shortlisted for the University of Cambridge’s Jane Martin Poetry Prize in 2017. In 2018, Rachel was selected for the National Centre for Writing’s Emerging Translator Mentorship Programme, where she spent 6 months being mentored by Norwegian translator Don Bartlett. Her work can be found in The Scotsman, the Scottish Review of Books and Words Without Borders, among others.

?"A cyclical dream of seasons to come.

Originally written in Norwegian, this story in verse follows the four seasons as they each in turn emerge from their slumber to change the landscape of a village and a nearby field with an apple tree. With each passing season, a different child is depicted nestled into the larger landscape asleep. As the year progresses, a pair of young children with pale skin and straight dark hair play and interact with the tree, but the real stars of the book are the seasons, each emerging with a vibrant design from various locations near the tree. Spring, a pale young boy with grassy hair, slumbers underground, emerging to dance around the town, a cloud of pollen surrounding him. Summer, a dark-skinned girl with hair made up of multicolored daisies, swings with joy after awakening in a flower bud. After snoozing inside an apple, a middle-aged, pale-skinned Autumn trails falling leaves from her flowing mane of auburn locks as she walks through the countryside, and an elderly, pale-skinned Winter, wrapped in coats and scarves, surveys the town after snoozing against the trunk under a toadstool. Readers of all ages will happily study the painterly illustrations for seasons to come, and the verse creates a soothing lullaby perfect for a nap at any time of the year.

Sure to be a favorite no matter what season readers are welcoming."
— — Kirkus Reviews (starred review)