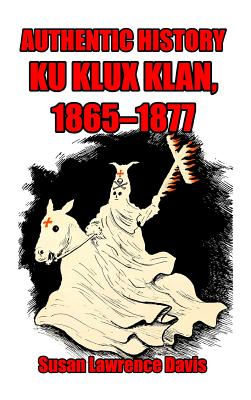 By Susan Davis
$20.85
NOT CURRENTLY IN THE STORE - Hard to Find - We Will Research Availability and Get Back to You

The only officially authorized history of the original Ku Klux Klan, written by the daughter of the founder of that organization in Alabama. Written to counteract the misrepresentations made about the original KKK and its activities, this now-suppressed book contains many astonishing "insider" insights, such as:

* The KKK was financed from England by the Jewish former Secretary of State for the Confederacy, Benjamin P. Judah (who fled the South at the end of the Civil War);

* The KKK's chief chaplain was a Roman Catholic;

* The hood--for which the KKK became famous--was in fact outlawed by the original organization because so many people were using its disguise to commit crimes in the name of the KKK;

* The original KKK's primary activity was political in nature, and their officers in various legislative bodies--reaching as high as the U.S. Senate--were focused on restoring white rule to the southern states;

* When official KKK posses were formed, they were under strict orders never to dispense mob justice or engage in whippings, lynchings, or other abuse;

* When rogue elements and non-KKK members started performing atrocities in the KKK's name, the leadership ordered the organization permanently disbanded, citing such abuse of its name as the primary reason for its closure.

Written in a racially-paternalistic style, this work also clearly reveals the mindset which lay behind the slave-owning era: a false belief that the blacks were "content" and "loyal" under white rule--and that only a few Southerners understood and supported the view of Abraham Lincoln: namely, that the black presence posed a long-term demographic threat and that they needed to be repatriated to Africa, rather than stay under white rule in America.

A sensational historical document, vital for anyone wishing to gain a proper understanding of the Southern antebellum resistance to "Reconstruction."

This edition has been completely reset, contains all the original images (digitally restored), and includes an index.

Cover illustration: a robed Klansman, drawn especially for the original edition of this book.