Gorgeous War: The Branding War Between the Third Reich and the United States (Hardcover) 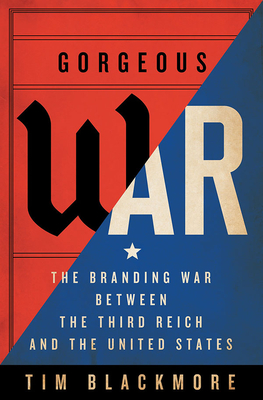 Gorgeous War argues that the Nazis used the swastika as part of a visually sophisticated propaganda program that was not only modernist but also the forerunner of contemporary brand identity. When the United States military tried to answer Nazi displays of graphic power, it failed. In the end the best graphic response to the Nazis was produced by the Walt Disney Company.

Using numerous examples of US and Nazi military heraldry, Gorgeous War compares the way the American and German militaries developed their graphic and textile design in the interwar period. The book shows how social and cultural design movements like modernism altered and were altered by both militaries. It also explores how nascent corporate culture and war production united to turn national brands like IBM, Coca-Cola, and Disney into multinational corporations that had learned lessons on propaganda and branding that were being tested during the Second World War.

What is the legacy of apparently toxic signs like the swastika?

The answer may not be what we hoped. Inheritors of the post-Second World War world increasingly struggle to find an escape from an intensely branded environment--to find a place in their lives that is free of advertising and propaganda. This book suggests that we look again at how it is our culture makes that struggle into an appealing Gorgeous War.