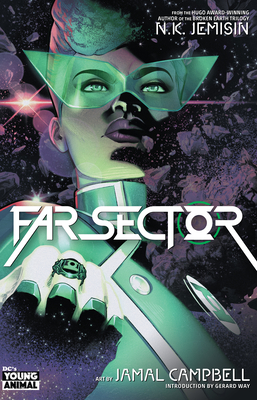 Unlike other Green Lanterns before her, Lantern Mullein's powers are born, not of will alone, but the "willpower required to live with fear," and she has to address some very familiar problems--the unwilling commodification of internet users, leaders modelling themselves after their former colonizers, an extremist minority asserting their beliefs over the majority, systemic racial inequities--on an unfamiliar planet in a Far Sector of the universe. If you enjoy the non-fiction writings of Cathy O'Neil or Tressie Cottom, perhaps try something new and pick up Jemisin's first foray with DC Comics!

Winner of the 2022 Hugo Award for Best Graphic Story or Comic!

The first murder in 500 years. Twenty billion suspects. One hope.

The City Enduring, a booming metropolis at the edge of the universe, hasn’t experienced a violent crime in generations. The Emotion Exploit has erased its citizens’ full range of feelings, allowing three resident races to overlook their turbulent history and coexist peacefully—until now.

Rookie Green Lantern Sojourner “Jo” Mullein is still adjusting to her assignment to protect this strange world when a brutal murder rattles its social order, threatening to undo centu r ies of controversia l pro gress . As the populace rises up against the legacy of the Emotion Exploit and leaders grapple for power under threat of a new war, Jo must rely on her unique instincts—as a Green Lantern and the only human in this sector—to solve the crime and guide the City Enduring toward a more promi sing future.

N.K. Jemisin is an author living and writing in Brooklyn, New York. This is fortunate, as she enjoys subways, tiny apartments, and long walks through city parks. Her short fiction has been published in a number of magazines and podcast markets, and has been nominated for the Hugo and Nebula awards. Her novels have also been nominated for (collectively) the Hugo, the Nebula, the Tiptree, the Crawford, the Gemmell, the...hell, I lose track. I actually won the Locus Award for Best First Novel and the Romantic Times Reviewers' Choice Award.