You're Fired: The Perfect Guide to Beating Donald Trump (Hardcover) 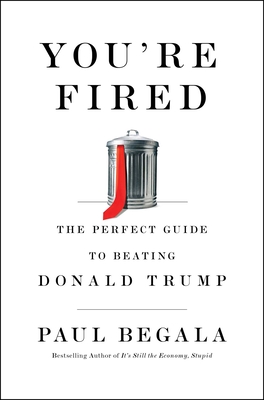 By Paul Begala
$27.00
NOT CURRENTLY IN THE STORE - Available to Order - Usually Arrives in Store in 1-5 Business Days!

“You’re fired!” Donald Trump became famous bellowing those words in a make-believe boardroom. In November, tens of millions of Americans want to yell it right back at him. Yet Trump has seemed to almost defy the laws of political physics. Paul Begala, one of America’s greatest political talents, lays out the strategy that will defeat him and send him and his industrial-strength spray-on tan machine back to Mar-a-Lago.

In You’re Fired, Paul Begala tells us how Trump uses division to distract from the actual reality of his record. Distraction, he argues, is Trump’s superpower. And this book is Kryptonite. In it, the man who helped elect Bill Clinton and reelect Barack Obama, details:

-The special weapons and tactics needed in the unconventional war against this most unconventional politician
-How to drive a wedge—or, rather, a pickup truck—between Trump and many of his supporters, especially blue-collar workers and farmers
-Where the votes to defeat Trump will come from, and how the Rising American Electorate can catch Trump flat-footed
-How Democrats can run on issues ranging from Coronavirus and healthcare to the economy, as well as climate change and Trump’s long-term plan to dominate the federal judiciary
-There is one chapter called simply, “This Chapter Will Beat Trump.” Find out why Begala is so confident and what issue he says will sink the Trumptanic

Full of memorable advice and Begala’s trademark wit, You’re Fired focuses on the lessons we can learn from the party’s successes and failures—and the crucial tools Democrats need to beat Trump.

Paul Begala was a chief strategist for the 1992 Clinton-Gore campaign. He served as counselor to the president in the Clinton White House, where he coordinated policy, politics, and communications. He was senior adviser to the pro-Obama Super PAC that played a critical role in reelecting Obama in 2012. He is the author of five books, including Is Our Children Learning?: The Case Against George W. Bush; It’s Still the Economy, Stupid; Buck Up, Suck Up...and Come Back When You Foul Up (with James Carville); Third Term: Why George W. Bush Loves John McCain; and Take it Back: Our Party, Our Country, Our Future (with James Carville). Begala is a CNN political commentator and an affiliated professor of public policy at Georgetown University’s McCourt School of Public Policy. Paul earned both his undergraduate and law degrees from the University of Texas. He and his wife live quietly in Virginia with their four sons and a German shepherd. (Okay, so they don’t live too quietly.)

“Paul Begala’s new work is a masterful, meticulously-researched roadmap not only for winning the 2020 elections but for defending our very democracy.  With characteristic wit, wisdom and strategic brilliance, Paul provides a panoramic view of the electoral map and a compelling look at challenges ahead, giving us the tools to fight For The People – and win."
— Speaker Nancy Pelosi

“Begala’s book is heartbreaking and hilarious, hopeful and helpful. It’s full of good information, clear analysis and sound advice on how we can build better lives and a brighter future together. It’s wise, profoundly patriotic and deeply moral. Read it."
— President Bill Clinton

"DO NOT BUY THIS BOOK* if you want trump to be president for 4 more years.  Otherwise, buy two and give one to a friend."
—James Carville

"If you want to know what’s going on...read this book!"
— Willie Nelson

"Paul Begala, the dopey @CNN flunky and head of the Pro-Hillary Clinton Super PAC, has knowingly committed fraud in his first ad against me."
—President Donald Trump

"Solid advice for anyone running for office, whether against the current occupant of the White House or not.""
— Kirkus Reviews