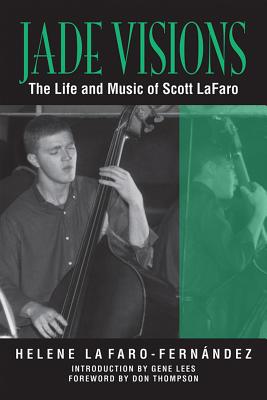 Primary Author:
Helene Lafaro-Fernandez
Other Authors:
Lees, Gene; Thompson, Don
Binding Type:
Paperback
Publisher:
University of North Texas Press
On Our Shelves Now
Publication Date:
08/01/2014
Book Description:
Winner of the Best Book of 2009, Jazz Division, sponsored by AllAboutJazz-New York, 2009.
Selected for "The Best of the Best" from University Presses, ALA Conference, 2010.
Winner of the 2010 Association for Recorded Sound Collections Award for Excellence in Historical Recorded Sound Research in Jazz, 2010.
Jade Visions is the first biography of one of the twentieth century's most influential jazz musicians, bassist Scott LaFaro. Best known for his landmark recordings with Bill Evans, LaFaro played bass a mere seven years before his life and career were tragically cut short by an automobile accident when he was only 25 years old. Told by his sister, this book uniquely combines family history with insight into LaFaro's music by well-known jazz experts and musicians Gene Lees, Don Thompson, Jeff Campbell, Phil Palombi, Chuck Ralston, Barrie Kolstein, and Robert Wooley. Those interested in Bill Evans, the history of jazz, and the lives of working musicians of the time will appreciate this exploration of LaFaro’s life and music as well as the feeling they’ve been invited into the family circle as an intimate.
ISBN:
9781574415759
Section:
Music
Location:
Golden Fig Carrboro